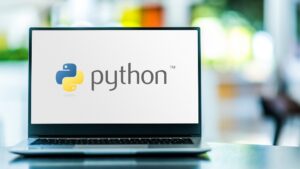 We are specialists in the Python computer language. We can train you in python for data science and data analytics.

Python is a programming language. It has skyrocketed in popularity over the last few years because, as a programming language, Python is relatively easy to learn. There are numerous free tools to write and learn how to code, and the community is so large that people write new and very useful add-ons (called packages) that make a programmer’s life much easier.

Python is a fantastic 1st or 2nd programming language.

The main distinguishing feature of Python as a programming language was the use of indents. Indentation (a ‘tab’ or 4 spaces) has been used historically in programming to make code easier to read. When you start a piece of logic like “if this, then do that,” the “do that” part would be indented so a reader could visually separate the steps of the logic. This was never required but looked nice. Python decided that since the best code looked nice, why not build that part into the coding itself? Indents in Python are used to separate different arguments. When we say “if this,” we need to indent the next line so that the computer knows to perform all of those steps once the if statement is true.

notice the curly brackets indicate what to do if

Example of “python” code – notice no curly brackets, rather the indentation tells the computer what is inside the if statement:

It might seem so simple and small, but this change forces people who program in Python into really nice-looking code, which in turn makes it easier to read code, which means it’s easier to learn!

What Can You Do With Python?

Python is so powerful that you can solve difficult math programs, process millions of data points using statistics packages, data mine the internet and create predictive models for investing or weather, or even program a Tesla to drive itself.

Python is everywhere. The world’s top two machine learning packages are Tensorflow (Google) and PyTorch (Facebook). Both systems are written with Python as the main input language. These are the platforms that are driving 99% of current innovation, so learning Python is the first step towards some of the best-paying jobs in the world.

How does Math Academy Help Me Learn Python?

Here at Math Academy, we have experienced tutors that can help you learn Python from the ground up. You don’t need any experience programming before. We will show you tools like Jupyter Notebook and HackerRank. You will be coding small projects to full systems in no time.

Our tutors are experienced software developers and academics who use programming to solve big problems every day. Whether you are interested in getting better for a certain class or looking to build the next Google or Tesla, we can help you start the journey!