Remember that a function f is a bijection if the following condition are met:

A set is a bijection if it is both a surjection and an injection.

Example 1. Show that the set of integers ℤ is countably infinite.

To show that ℤ is countably infinite, we must find a bijection between ℕ and ℤ, i.e. we need to find a way to match up each element of ℕ to a unique element of ℤ, and this function must cover each element in ℤ.

Notice that each even natural number is matched up to it’s half. It follows the function f(n) = n/2.

We can write this as a piecewise function as:

Now we need to check if our function is a bijection.

Injectivity: Suppose the function is not injective. Then there exist some natural numbers x and y such that f(x)=f(y) but x≠y.

These are contradictions, so the function is injective.

Surjectivity: Suppose the function is not surjective. Then there is some integer k such that there is no n in ℕ for which f(n) = k.

These are contradictions, so the function is surjective.

Since f is both injective and surjective, it is a bijection. Therefore, |ℤ| = |N| =אo. ∎

This result is often surprising to students because the set ℕ is contained in the set ℤ.

One function that will work is f(n) = n/2. Checking that it is a bijection is very similar to Example 1.

There are many sets that are countably infinite, ℕ, ℤ, 2ℤ, 3ℤ, nℤ, and ℚ. All of the sets have the same cardinality as the natural numbers ℕ. Some sets that are not countable include ℝ, the set of real numbers between 0 and 1, and ℂ. 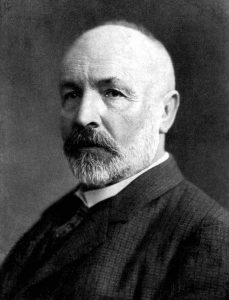