Integral transformation data back to the Work of Leonard Euler (1763 & 1769), who considered them essentially in the form of the inverse Laplace transform in solving second-order, linear ordinary differential equations. Even Laplace, in his great work, “Theorie Analytique Des Probabilities”(1812), credits Euler with introducing integral transforms. It is Spitzer (1878) who attached the name of Laplace to the expression

Employed by Euler. In this form, it is substituted into the differential equation where

is the unknown function of the variable

In the late 19th century, the Laplace transform was extended to his complex form by Poincare and Pincherle, Redis covered by Petzval, and extended to two variables by Picard, with the further investigation conducted by Abel and many others.

The first application of the modern Laplace transformations equations arose of Batemer (1910), who was working on radioactive decay

and obtaining the transformed equation. Bernstein (1920) used the expression

No account of the Laplace transformation would be complete without mention of the work of Oliver Heaviside, who produced a vast body of what is termed the “Operational Calculus”. The material is scattered throughout his three volumes, Electromagnetic Theory (1894, 1899, 1912), and bears many similarities to the Laplace transform method. Although Heaviside’s calculus was not the theory of Laplace Transformation, he did find favour with electrical engineers as a useful technique for solving their problems. Considerable research went into trying to make the Heaviside calculus rigorous and connecting it with the Laplace transform. One such effort was that of Bromwich, who, among others, discovered the Inverse Laplace Transformation!

Where lying to the right of all singularities of the function

In this article, we shall consider theoretic aspects of the Laplace transform, reserving for the application of the subject to the solution of linear differential equations. This transformation is defined by the equation;

A function  is said to be of exponential order as

i.e., if given a positive integer, there exists a real number

Briefly, we say that

is of exponential order.

For example. is of exponential order as being any positive integer.

So we are going to do L’Hospital Rule where we differentiate numerator and denominator individually,
hence,

Since.
Hence we can say that is an exponential order as.

Another example.   is not of exponential order as

is not of exponential order

DEFINITION OF THE  TRANSFORM  CONCEPT

An improper integral of the form is called Integral Transform of

if it is convergent. Sometimes it is denoted by  or  Thus

appearing in the integrand is called Kernel of the transform. Here’s a parameter and is independent of

may be real or complex number.

This transform is known as Laplace transform.

Some examples of well-known transformations

Suppose  is a real valued function defined over the interval

The Laplace Transform of, denoted by, is defined as

Here L is called Laplace transformation operator. The parameter s is a real or complex number. In general, the parameter

is taken to be a real positive number. Sometimes we use symbol

The operation of multiplying  by

Statement: – If  is a function of class

, then Laplace transform of

Suppose is piece-wise continuous in every finite interval and is of exponential order an as. Then exists

in the finite interval

exists. It remains to show that

is of exponential order a

is finite, i.e., given a number

, there exists a real number

can be made as small as we please choosing

Fact: The condition given in this part is sufficient for the existence of, but are not the necessary conditions.

are Laplace forms of

Fact: This theorem can also be restated as:

is the Laplace transform of

and a is any real, or complex number, then

is the Laplace transform of). That is to say,

Solution. We know that,

Example.  Let’s we are going to prove,

Solution. We know that

Example . We are going to find Laplace transform of

An Alternate form of Theorem 6.

Generalising the results (1) and (2), we get the required result. 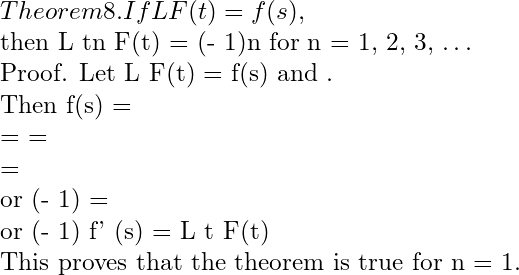 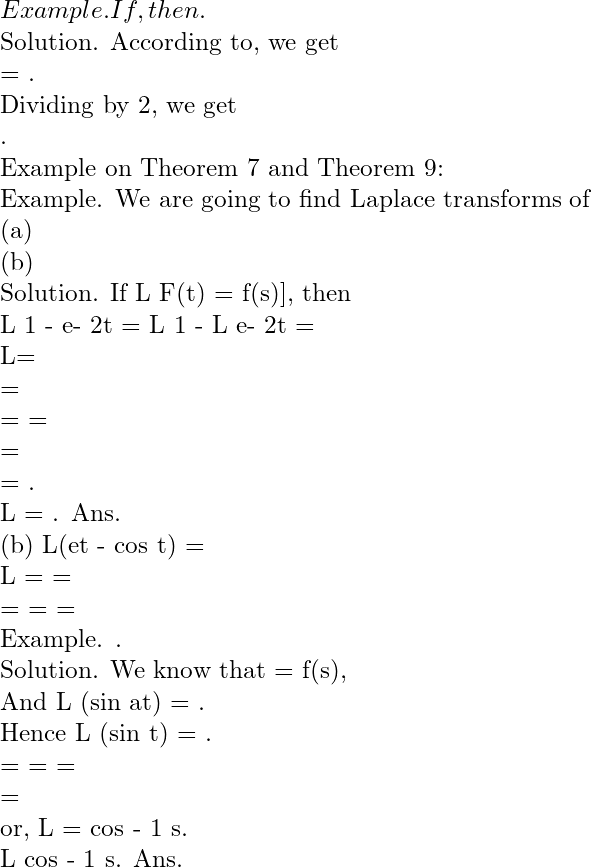 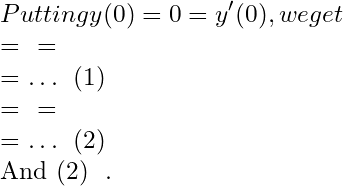 A few worked examples should convince the reader that the Laplace transform furnishes a useful technique for solving liner differential equations. Lastly thanks to all of you and hope you all enjoy this article. We will meet next time with a new article.

This is merely a brief selection. An extensive list is given in reference –