All The Logarithm Rules You Know and Don’t Know About

The logarithm function is one of the most known and used functions in mathematics and other fields like physics, finance, chemistry, …etc. this article is logarithmic heaven where you can learn many things about logarithmic functions and where you can find a large list of logarithm rules, identities, and formulas gathered in one place to make easy the manipulation and the evaluation of the various calculations that involve logarithms. So let’s start our journey in the logarithm world!!!

All you need to know is that logarithms are essentially a different format for writing exponents. If you know how to use exponents and you know the format for logarithms, then you’ll do fine in this section. 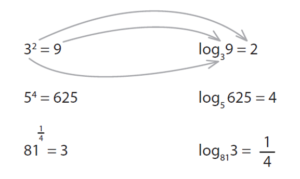 Virtually every major test contains some variation on this problem, so plan ahead to make sure you know how to answer this problem type.

You’ll be given a logarithm problem with one value (x, y, or z) missing. All you need to do is rewrite that sucker as an exponential statement. Take a look!

That’s a lot easier to work with, isn’t it? Find matching bases and you’re practically done!

We call “Common logarithm” the logarithm function with the base 10. Generally noted by “

The common logarithm of

is the power to which

would have to be raised to equal

is the inverse of the exponential function

Graph of the common logarithm 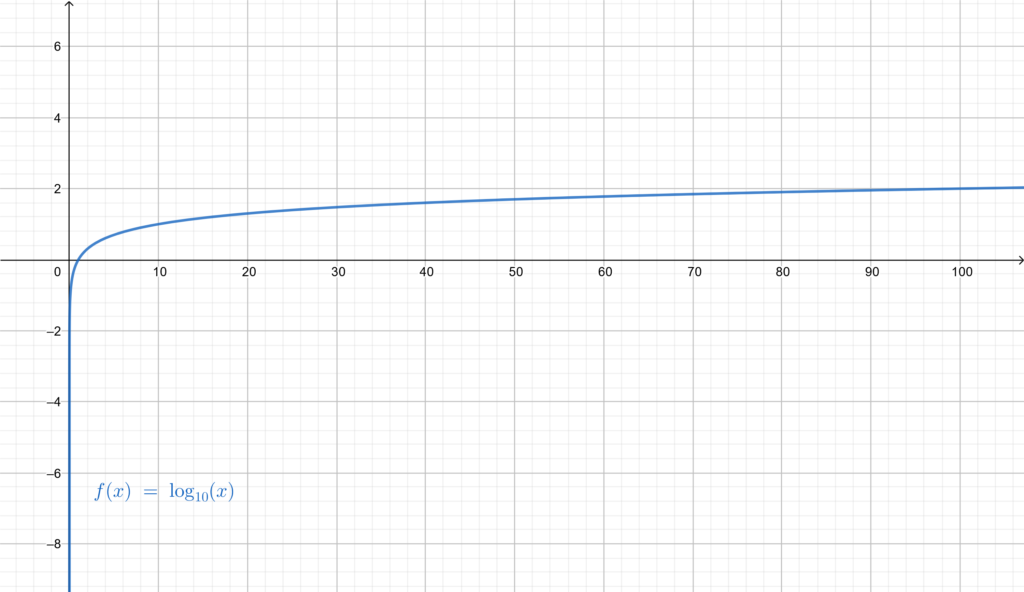 is the mathematical constant known as “Euler’s number” or “Napier constant”; it is an irrational and transcendental number, its value is approximately

, this constant is also widely used as a base for exponential functions. Natural logarithm is noted

. The natural logarithm of

is the power to which the constant

would have to be raised to equal

, meaning that the natural logarithm

is the inverse of the exponential function

Here is Graph of the natural logarithm

and the exponential function

. Note the natural logarithm and the exponential function base

are symmetrical with respect to the line 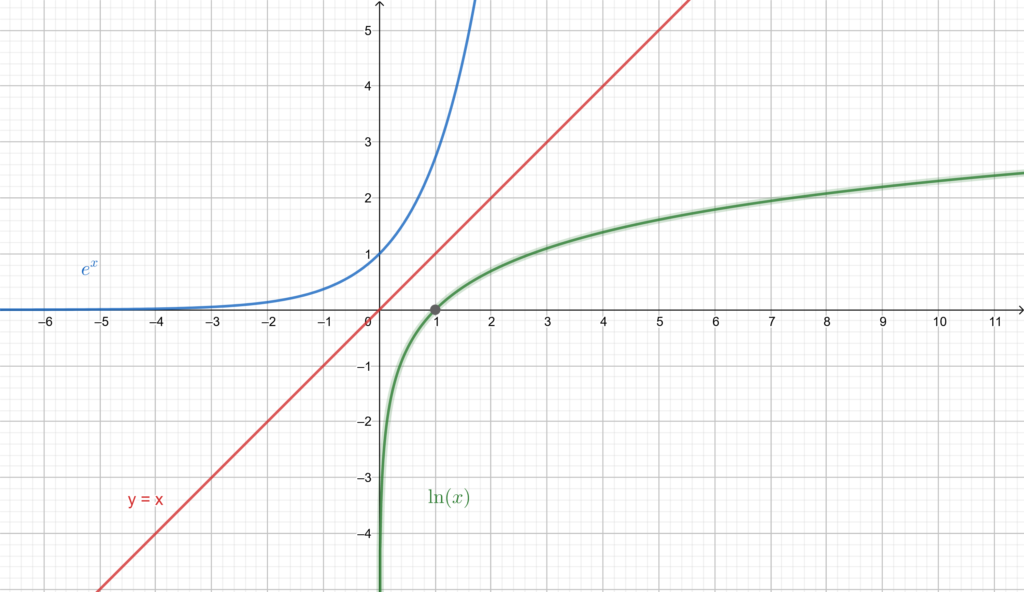 1- Logarithm of the base:

Logarithm identities for the different operations:

6- Logarithm of the reciprocal:

7- Logarithm of a quotient:

8- Logarithm of the reciprocal of a power of base:

9- Logarithm of a power:

10- Logarithm of a square root:

12- Logarithm to a quotient base:

13- Logarithm to a power base:

14- Logarithm of a power to a power base:

15- Power with an logarithmic exponent to the same base as the power:

16- Power with a logarithmic exponent:

17- Since the logarithm is a monotonic function, more precisely monotone increasing function if the base

and monotone decreasing function if the base

18- Logarithm with the base

is the Natural Logarithm

are real positive numbers and

are real numbers; because

Changing the logarithm base:

26- Changing the logarithm base:

This identity of changing the base is very useful to calculate the wanted logarithm using the calculators, espacealy useful since nearly all calculators have a “

” buttons, but not all of the calculators have a button for a logarithm with a random base.

27- The formula of base changing has many consequences, from which we cite:

is any permutation of the subscript

28- Changing the natural logarithm (base

30- From the previous one we can write also: (Canceling logarithm by multiplying by the logarithm with the base and the argument switched)

Summation and subtraction identities: This two identities are especially useful in probability theory, when dealing with logarithmic probabilities:

(or else the subtraction identity won’t be defined since the logarithm of 0 doesn’t exist).

Common mistakes that you should avoid and be careful from:

Limits of the logarithm function:

47- For higher-order integrals, it is convenient to define:

and so we get:

When dealing the logarithm, we need to keep an eye on the signs and the values of the base and the argument of the logarithm function, we can summarize the conditions we have to verify as follow:

We have the definition of logarithm:

These conditions must be taken into consideration when with real numbers, and to do so we use the absolute value when necessary to ensure that the conditions are always met.

In the case of real numbers, we introduce the absolute value to some of the logarithm rules, as follow:

51- The logarithm to the real base

of a negative number

in the polar form:

Then the complex logarithm for negative

Why not take a look at the 3D plot and the contour plot of the logarithm and the exponential functions!!!

Here is a summary of the main rules of the logarithm

Convert these expressions into logarithms

(Answers at the bottom of the article)

Solve these logarithms for the missing info:

(Answers at the bottom of the article)

A significant property of the characteristic (for common logarithms) is that (characteristic + 1) will give the number of digits of the integral part of the number whose logarithm you determined. In the above example, 91000 contains (4 + 1) = 5 digits.

This is explained as follows:

Also, the characteristic of a logarithm could be either positive or negative; however, the mantissa should always be positive.

If the calculated value of the logarithm of some number is negative (usually, calculators generate values containing a negative mantissa), then we make the mantissa positive as follows:

We call “Antilogarithm” the inverse of the logarithm function, and we write as follow:

, and the antilogarithm of

For example, the antilogarithm of

We call “Cologarithm” the logarithm of the reciprocal of a number

We call “Harmonic logarithms” of order

, the unique functions that, for all integer

) and for all non-negative integer

Where the “Roman symbol”

This gives the special cases:

is a Harmonic Number:

The harmonic logarithm has the Integral

The harmonic logarithm can be written

is the Differential Operator, (so

This formulation gives an analog of the Binomial Theorem called the Logarithmic Binomial Formula. Another expression for the harmonic logarithm is

is a Pochhammer Symbol and

is a two-index Harmonic Number.

Let’s take a look at some logarithm series

Then we can deduce the expansion of

and we will get:

Or in other way:

Note that the logarithm series isn’t valid when

and it doesn’t have a sum, and this makes sense since

Also the logarithmic series is valid only when

whereas the exponential series is valid for every value of

represent the Euler-Mascheroni constant and

is the Riemann zeta function.

This function is interesting since it gives the same image of the logarithmic function for every natural number, i.e.

, or in other terms the graph of the false logarithm function

intersect with the graph of the logarithm function for every

The spectacular thing about Johnny [von Neumann] was not his power as a mathematician, which was great, or his insight and his clarity, but his rapidity; he was very, very fast. And like the modern computer, which no longer bothers to retrieve the logarithm of 11 from its memory (but, instead, computes the logarithm of 11 each time it is needed), Johnny didn’t bother to remember things. He computed them. You asked him a question, and if he didn’t know the answer, he thought for three seconds and would produce an answer. — Paul R. Halmos

You have no idea, how much poetry there is in the calculation of a table of logarithms! — Carl Friedrich Gauss

Well, here we arrive at the end of this journey in this logarithmic paradise if you have anything you want to be added to this article just let us know, and we will make sure to add it to make this article the ultimate logarithmic article. Also, make sure to check the blog post about Absolute Value and Logarithms.

And don’t forget to join us on our Facebook page stay updated on any new articles and a lot more!!!!!