Looking at Figure 1, a comparison between the totals for NYC and National, i.e. the blue and purple lines, reveals that NYC employment levels had decreased, relative to January, much more than those nationally. Breaking this down by income level categories, National low-income jobs (brown) had the lowest trough during the first viral surge peak at the end of April when shutdowns began, but it recovered much faster than NYC low (orange) and middle (green) level income jobs, which also had similarly low troughs. National middle and high income level jobs were significantly higher than their NYC counterparts for the entirety of the sampled period shown. This implies that while overall the high degree of shutdown to (successfully) contain the virus by NYC caused significantly more economic depression within NYC than National employment, for which economic shutdowns were neither consistent nor to the intensity of NYC, the national average of low-income employment was hurt the worst, or at least was comparably, during the trough of greatest shutdown and has also recently come back down to NYC levels as the nation reaches its second COVID-19 viral peak. This may speak to a greater divergence in economic stability between the lowest quartile income jobs and those above them nationally, which is only partially true in NYC and only between highest quartile jobs and those below.

Next, looking at the differences within industry categories (i.e. income levels) for NYC and National data we can see that employment decreases relative to January were also relatively ordered by the income of the job only for the National data, in that low-income jobs levels were lower than middle-income jobs levels, which were lower than high-income job levels. This pattern does not hold up for NYC jobs, where low and middle income jobs were interwoven, alternating as to the highest decreases throughout the spring and summer, while high income NYC jobs were always significantly higher than the two lower categories. This implies that while on the national level the conditions of employment between low and high income jobs vary significantly (aka, in terms of job-stability), within NYC they do not and thus were mutually effected at similar rates compared to overall economic shutdown and easing (i.e. Spring and Summer).

Overall, one can see that all employment numbers and their quartile breakdowns follow similar curves of reaching a global minimum (trough) during the first viral surge peak at the end of April when shutdown policies emerged and changed concavity mid-May when the first viral curve flattened. While National recovery has already begun to flatten out as the country is at its second viral peak, and thus forced into slight shutdown (even if not by policy), NYC recovery is continuing to climb due to its successful viral containment. 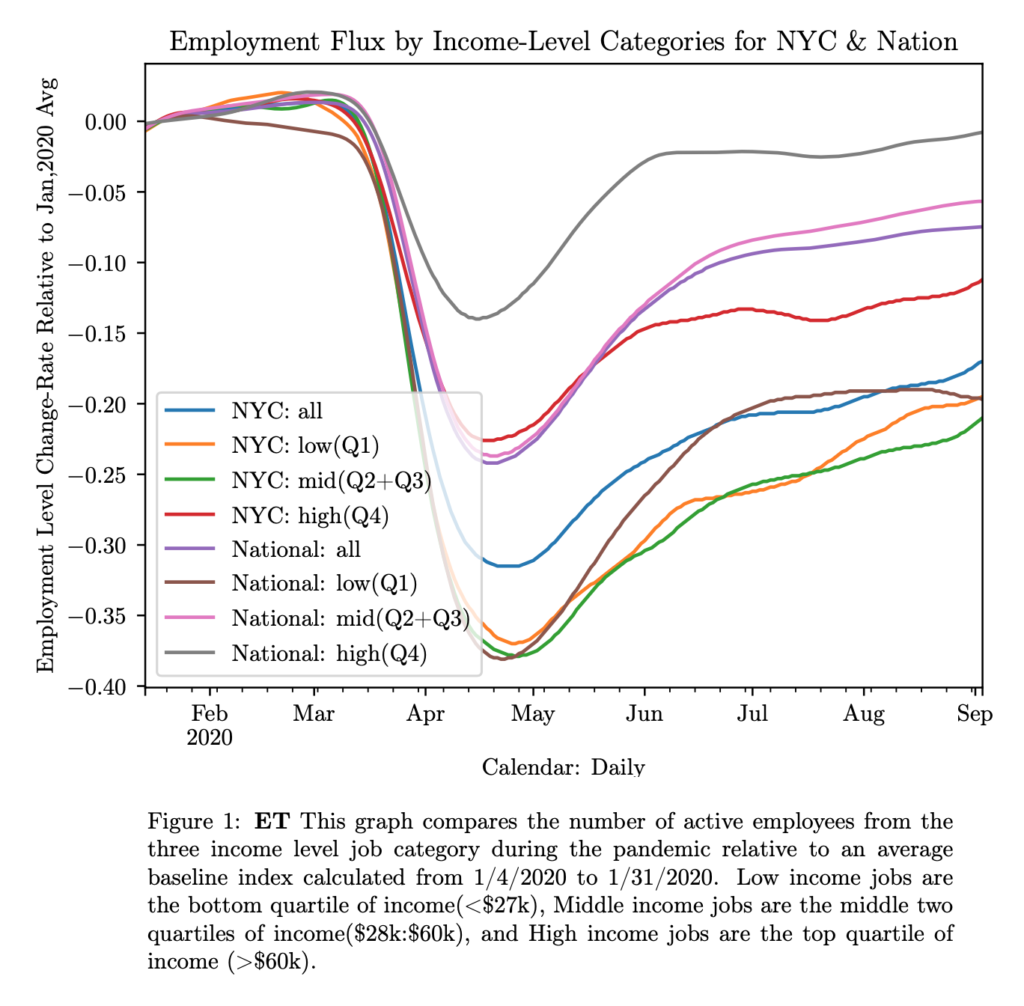 The four industries under analysis are 1) Education and Health Services (NAICS supersector 65), 2) Leisure and Hospitality (ss: 70), 3) Trade, Transportation, and Utilities (ss:40), and 4) Professional and Business Services (ss: 60). We may recategorize these industries along the 2 time \& space dimensions of interaction as Functional/Communicative and Proximate/Remote as 1) Remote Functional (essential’) Services, 2) Proximate Communicative (face-to-face’) Services, 3) Proximate Functional (infrastructural’) Services, and 4) Remote Communicative Services (i.e.remote’). Clearly, the Proximate Communicative (face-to-face’) jobs are most affected by social distancing policies, although also by extreme consumer business mandatory shutdowns, while Proximate Functional (infrastructural’) jobs are mainly affected by the shut-down measures. While some essential’ services may be performed remotely, as in virtual classes or medical consultations, they often require at least some physical proximate inspection as for medical testing, surgery, & hospital in-patient care for ss 61 and pedagogical dialogue especially with younger students for ss 62. Yet, there may be some overlap between ss 40 (infrastructure’) and the non-remote’ components of ss 65 (essential’) since the utility jobs in a hospital maintained, the more proximate functional aspects, would be included in ss 40. While business and professional services are often accelerated in consensus formation by proximate functional communication, i.e. face-to-face conversation, they may still proceed, and in fact often more rationally, by virtual communication protocols and are thus most commonly conceived as remote’ jobs, although such has been technically modified in this analysis. These jobs tend to increase in demand with expected long-term macro-system failures as such require consensus formation on new modes of systemic functionality, while Remote Functional (i.e.essential’) jobs respond to short-term system needs. Thus, in congruence with expected rises in the density rates of new infection counts, and thus population sentiment of proximate danger, the demand for `essential’ services (Remote Functional) increases in specificity to its health subcategory but also with education via new knowledge demands.

These hypotheses are tested in Figure 2. All job industries dipped into a trough during the first COVID-19 peak. Proximate Communicative jobs were most severely and immediately affected by the COVID-19 infection-rate surges since they are most affected by social distancing policies which were put in place first and more spatially and temporally consistent than economic shutdown policies. These face-to-face’ jobs recovered during the first inter-peak period of the late-spring, but with the second emerging peak, have begun to dip since social distancing compliance is increasing in response to the threat. The other job categories are not affected by this second emerging peak since economic shutdowns are not being put in place due to the high costs of the previous shutdown, only social-distancing policies. Thus, while the other job categories were able to adapt to the need for face protection and social distancing, especially by limiting actual communication in close proximity, Proximate Communicative industry jobs are unable to adapt. Remote’ Jobs, specifically Remote Communication, were able to use virtual communication methods to reduce the effect of the building (proximate-functional) shutdowns and social distancing (i.e. non-proximate-communication) policies, and thus were least affected. Both Functional job categories followed the same curve since they each have mixed remote & proximate sub-functionalities and must adapt, not through virtual communication technologies, but only through workplace safety-hazard protocols, whether the threat is due to fellow workers (infrastructure’) or patients (essential’). Such functional technologies, i.e. artificial intelligence (remote) and robotics (proximate), are only emerging into mainstream use. The main difference lies not in the spatial distance of instrument-application, but in the abstractness of the instrument. Thus while remote-functional jobs require abstract skills from higher-education, the hands-on skills of proximate-functional are often acquired on the job, indicating divergent correlations with income-low and income-middle from the previous job category comparison (cc: section 1 / figure 1). While remote-functional jobs may be performed somewhat remotely, their time-sensitive critical need often requires proximity for effectiveness and efficiency, thus offsetting any difference between the functional job categories in response to the COVID-19 crisis progression, including the greater demand for health professionals (within remote-functional) to respond to the immediate viral infections. 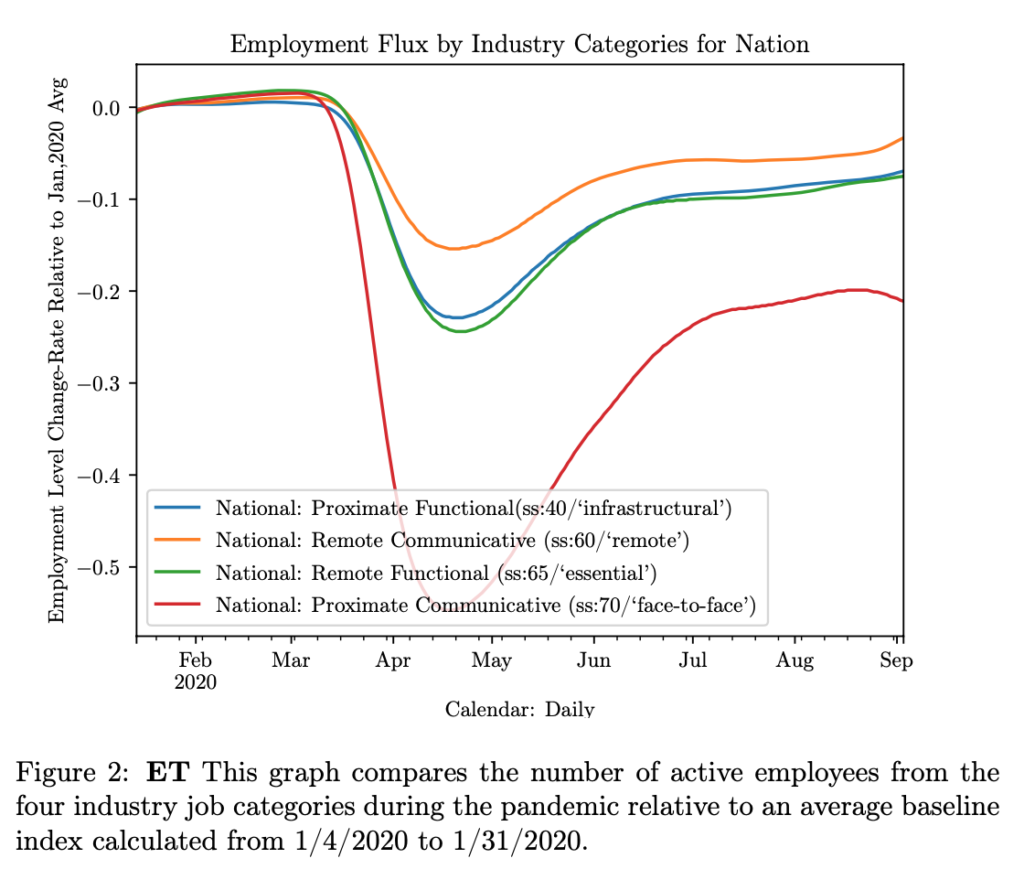 The problem of economic inequality in response to the COVID-19 crisis thus presents itself mainly as how to increase the capacity for proximate-communicative services. A solution in-itself may not be feasible during either present or imminent threats of infection-spreading conditions, but can instead be offset onto both containing the virus more effectively and in shifting the (low-income) labor-force away from proximate-communicative to proximate-functional or remote (function \& communicative) industries through economic restructuration. Both of these policy strategies converge onto specific technical capacity development of the operating economic system within the newly emerging crisis-domains. The virus can be better contained for long-term economic gains through stricter and widespread shut-down measures with complementary income subsidies as longer stay-at-home relief packages’ and higher costs to non-compliance in coordination with surrounding governments and travel-quarantine protocols, as well as by increasing the efficiency and effectiveness of crisis response by the functional industries – themselves both essential’ although operating in different scales as for specific health responses and stable infrastructural needs to support population sustenance – through investments in labor supply increases and the domain-specific technological advances. Skewing the work-force distribution away from proximate-communicative can be achieved by creating greater availability of (virtual) technical training for newly emerging (i.e. crisis-based) needs and building technology to support greater technical capacity with less educational abstract skill development required.

While clearly investment in Remote Communication technology and its labor-supply is a less essential crisis-response requirement already met by the financial market captures, investing in Functional Technique, Technician, & Technology (virtual & mechanical) companies is an unmet requirement, since the domain of the functional-need has only recently been revealed by the COVID-19 crisis and is still being discovered scientifically, for which non-expert consumers lack to information to exogenously push the market forces towards this equilibrium. It is thus ripe for advances in NYC-wide operations to enable faster and smoother economic recovery of job equality under persistent critical conditions from the threat of new viral peaks emerging either due to seasonality, i.e. the upcoming winter, or spatial diffusion, i.e. cross-contamination from non-containing (geographic or transportation) neighbors.

In specificity, the newly emerged economic domain demanded by the crisis is for functional communication, both proximate and remote, to increase the capacity of consensus formation by information extraction in critical decision-making for systemic action coordination within dynamic conditions of uncertainty – inter-disciplinary `scientific’ research processes with data-analytic hypothesis-testing. Growth of this sector will increase the functionality-reach of remote-communicative industries and minimize the communicative (i.e. infection-threatening) needs of both proximate-functional and remote-functional industries, as well as the consumer demand for and risks in service of proximate-communication jobs while generating a new market vacuum for capital to sublimate.