One of the most fundamental algebraic structures in mathematics is the group.

A group is a set of elements paired with an operation that satisfies the following four conditions:

I. It is closed under an operation (represented here by “+”, although it does not necessarily mean addition):
For all elements a and b in the set S, a+b is also in S.

II. It contains an identity element (often written as “e”):
There is some element e in the set S such that for every element a in S, a+e = e+a = a.

IV. Inverses exist:
For every element a in the set S, there is an a-1 in S such that a+a-1 = a-1+a = e We will look at some examples of groups and sets that aren’t groups.

Notice that if 0 were in this set, it would not be a group because 0 has no inverse. Therefore, ℚ – 0 is a group.

Example 5. The trivial group {e} This group consists only of the identity element. We don’t need to specify the operation here because it works for both multiplication and addition.

The examples here involved only numbers, but there are many different types of groups.

For example, the ways to transform a triangle is called a Dihedral Group, with the group operation being the act of rotating or reflecting the shape around an axis. The possible permutations of a Rubik’s Cube are also a group, with the operation being a sequence of moves. It’s powerful to know that a set is a group because it gives you an understanding of how the elements will always behave. Groups have many other properties that are useful to mathematicians, and there is a whole field of study built off of this knowledge called Group Theory. 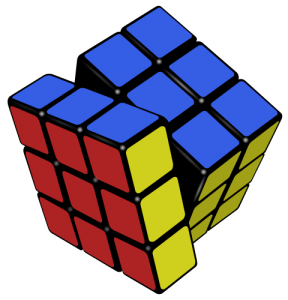 The set of permutations of a Rubik’s Cube is considered an algebraic group.