Operations research is the art of problem-solving and decision-making. In this article, we will learn more about “The Science of Doing Better” and its endless applications.

If ever you have been in any of these situations or similar problems, you may be interested in knowing about the operations research field. In this article, we will take a journey into the world of operations research, where we strive for the OPTIMUM.

What is Operations Research?

Operations research is the discipline of using various and advanced mathematical techniques and methods in order to determine the best solution for a given real-life decision-making problem. It is considered as a branch of the Applied Mathematics field, and sometimes considered the same as decision-making science and management science.

Origins and development through time

Some sources may suggest that operations research started way before (it goes back to the 17th and 18th century), but the beginning of the modern operations research took place during World War I when science was used as a way to ameliorate military operations in England, when the British army needed help to reinforce their air and navy forces. In 1917 and as Germany increased the attacks on Britain’s supply lines resulting in destroying an average of one ten ships, causing big losses in lives and supply line disruptions, and to face this situation, Britain’s army gathered scientists to help avoid or reduce the damage caused by the Germans.

After analyzing all the data available to them and modeling the problem, the scientists were able to optimize the size of the convoys, the speed, and the timing for the safest sailing, and only six months later the average losses were reduced to an impressive one in 200 rate, which made Germany’s assaults inefficient.

After World War I, in 1934 and as a measure to reinforce their defense in case of an air attack from Germany, scientists’ simulations showed that in case of war, the German air force can inflict massive damages and takedown vital targets easily, and by 1938 this fatal attack be delivered in only 24 hours window. In order to prevent that, a set of scientists were assigned by the British government to study the practicality of using radio waves against aircraft, the scientists proved that radio waves could detect, track down, and range aircraft, resulting in the invention of the radar.

This invention was not enough, so by merging Scientific Research with Operational Experience (the reason for the name Operational Research) the team was able to determine the best placement and positioning of the radars, resulting in an exceptional air defense system. Therefore, operations research allowed the earliest possible detection and interception of enemy aircraft. Some sources suggest that by the battle of Britain, radar has increased fighter command’s defensive capability by a factor of 10, and operations research doubled this to a factor of 20.

After World War II, operations research was integrated into all kinds of sectors and widely applied to solve problems in infrastructures, health care systems, transport and supply, business, industry, and banking to name a few. The use of operations research quickly increased because of its incredible effectiveness with real-life decision-making problems.

The applications of operations research are endless, helping to solve different problems and backing decisions with science, here is a general list of the main fields using it: 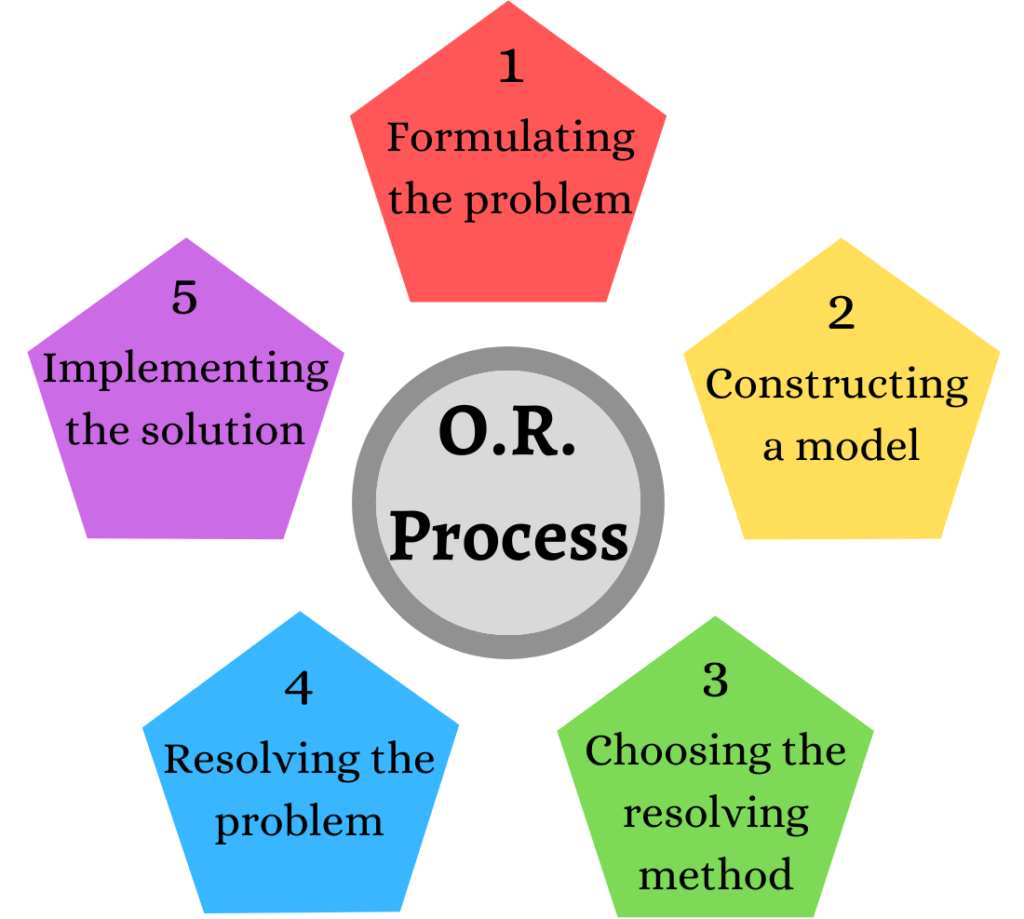 The first step of the O.R process is to formulate the problem, and it goes without saying that problems in the real world don’t present themselves ready, clearly described, and with well-put information and details in front of the eyes at first sight. The problem statement is often ambiguous and incomplete, usually, the problem contains information that need to be extracted then rewritten in a way that helps get the best use of it, in addition sometimes a problem may embody several other sub-problems to deal with which is may make the problem that seems from far easy to describe and formulate, more complex.

An important goal of this step is to determine the objectives that we want to achieve like minimizing the costs, delivery time or maximizing the profits …etc. Seeing and being able to formulate the problem the right way is a critical step in order to assure that the rest of the work build on this formulation is done on a correct and solid base since it is the first step of the O.R process, also helping in achieving a correct, relevant and useful solution provided for the real problem in hand, not for just a superficial undetailed version of it.

Constructing a model for the problem

It is very important to keep in mind that the solving methods and algorithms depend on the chosen modeling method, i.e. choosing a specific modeling method implies that we use for solving the problem the correspondent solving techniques and changing the model obligate a change in the resolving technique. Every modeling method opens a door for its solving approaches and therefore choosing the best model for a problem is of the essence. A problem can be modeled in several ways but some ways can grant us a better solution with better precision while saving time.

Choosing the resolving technique or method to use

The next step is selecting the method to use, and in this matter, the menu is nothing less than diverse, through time mathematicians and scientists developed a lot of methods, algorithms, and techniques to resolve the different problems. The modeling step will determine in general the set of methods we are able to use but that doesn’t limit the choices at all since every modeling method have plenty of resolution techniques. For example, if we choose to model a given problem using graph theory, now for the resolution we need to choose the methods and algorithms that are developed for graphs, like the Bellman-Ford algorithm or Dijkstra’s algorithm for finding the shortest path in a graph.

Now, and knowing that O.R. solving methods have a great deal of variety, let’s go through the major classifications of these methods:

In this step, we apply the chosen method to the problem with its data, variables, the relation between them, the restrictions, and the objectives and targets of the optimization process. Depending on the selected approach, the time required for the resolution may vary a lot depending on the level of accuracy wanted for the solution.

This step is a very good demonstration of the power of mathematics combined with computing using optimized algorithms and powerful hardware. In addition, very helpful softwares are available to help with the resolution step, from simulation, planning, and scheduling to optimization, forecasting, and computation for discrete combinatorial problems. Some notable software: IBM ILOG CPLEX Optimization Studio, Excel solver, Simulink.

The final step of the O.R. process is the implementation, after we got the solution, we proceed to execute the solution in the real world, knowing the specific conditions needed if any, under which the solution can be applied to achieve the wanted result. Also bearing in mind the limitations of the solution if there are any, and keep the implementation and the real execution within the limits, or else the expected results won’t be met and may result in deteriorating the situation instead of improving it.

The step allows us to detect any issues made during the other steps or any unrealistic or impractical assumptions of the variables of the problem or the execution potential in real-life or unexpected complications. In this phase, we validate the results to determine their accuracy and validity or if they need some tuning to overcome some overlooked issues, in addition, reporting any recommendations to be made aiming to ameliorate the results and the implementation process.

Let’s keep in mind that this process divided into 5 steps is just one of many other ways to describe the operations research process, you may find several ones using only 3 steps or some other ones detailing into 7 steps depending on the level of details intended for describing the process.

After introducing operations research, its development, applications, and its process, we will discover in this section the possible opportunities and careers that operations research opens, the demand for O.R. in the market, the salaries, and some forecasts into the future. For this, we will take the USA as a study case and the statistics and results we are about to study here are from the US Bureau of Labor Statistics Occupational Employment Statistics (2019 Data).

The job of Operations research analyst can also have many other similar, usually overlaying or intersecting, occupations like Logisticians, Management Analysts, Market Research Analysts …etc.

In the following statistics, we will take operations research analysts as the study case. 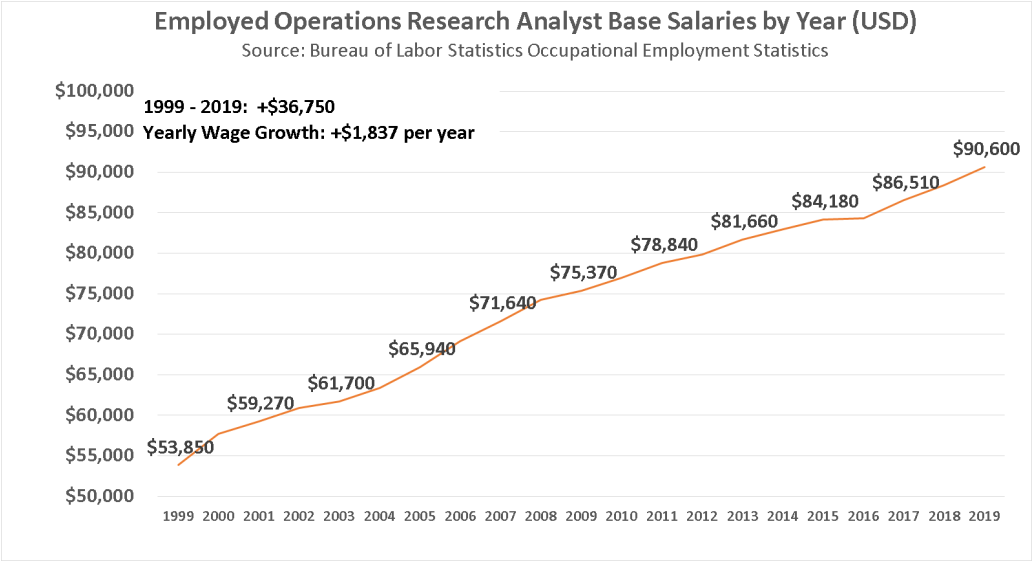 Note that the salaries do not include bonuses, signing bonuses, benefits, overtime, tips, or commissions. 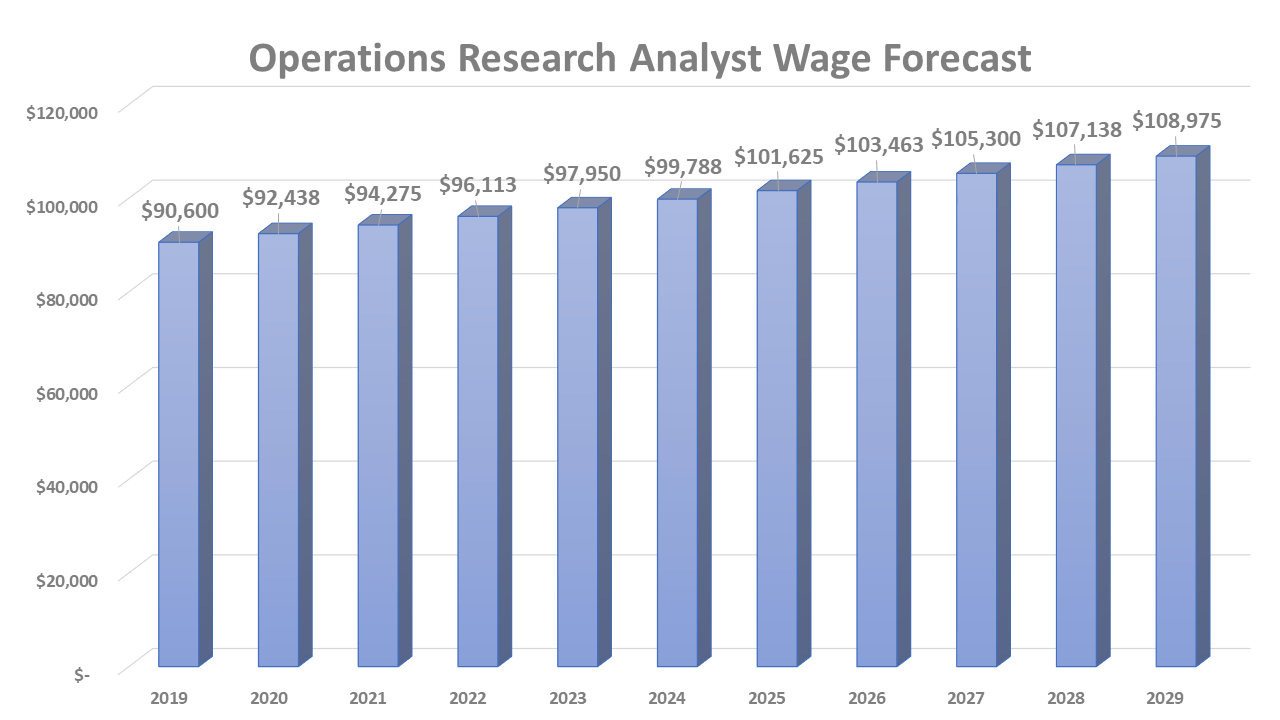 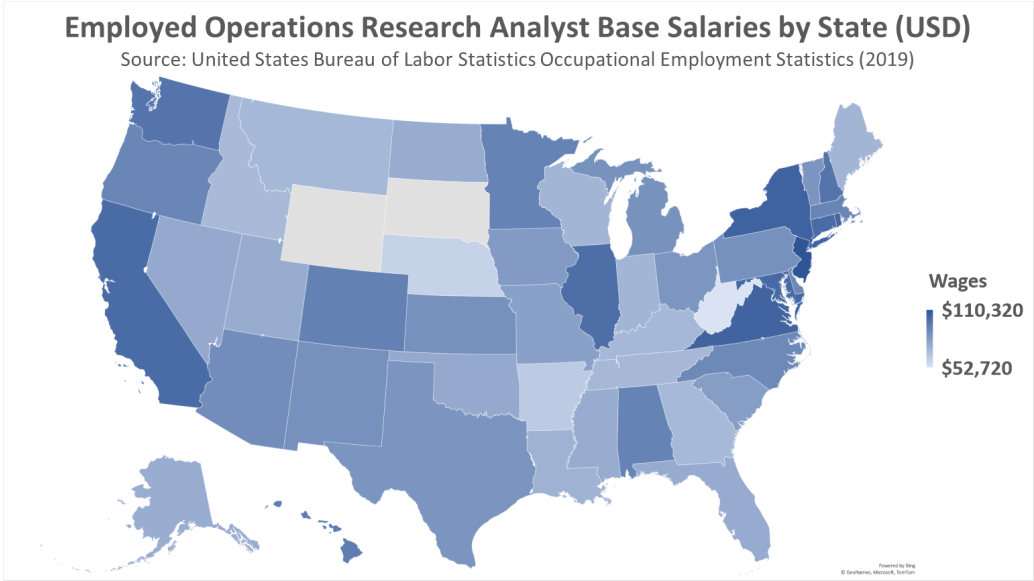 The map shows a remarkable difference in base salaries between different states, where the darker blue the state is on the map the higher is the base revenue.

The top 5 highest paying states are:

The top 5 lowest paying states are:

We can see that there is a $57,600 difference between the highest and the lowest paying state. 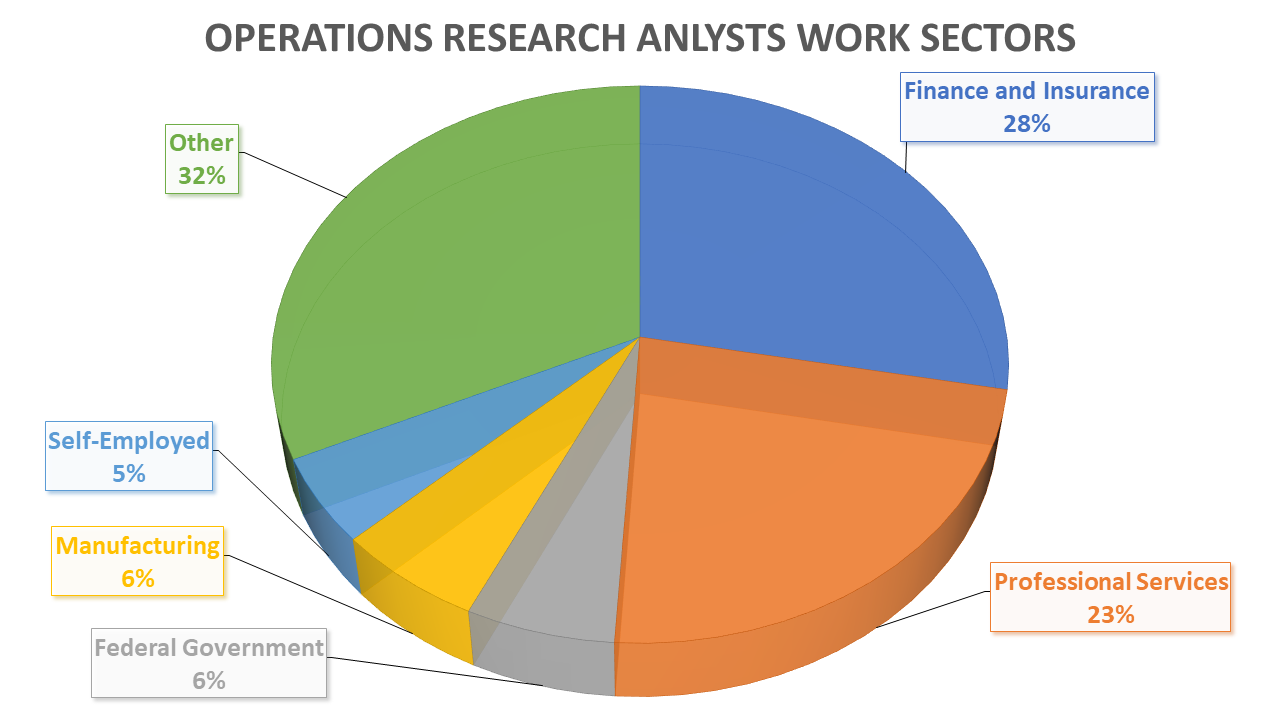 We notice that the Finance & Insurance sector and the Professional Services sector are incorporating the most operations research in their environments, followed by the Federal Government and Manufacturing sectors. We also see a big portion of 32% for the other sectors since operations research has multiple applications in almost every field.

Also, the statistics give us a view on how the 2019 pay breaks down by work environment:

We can see that the Federal Government sector is paying higher with a remarkable margin from the other work environments. 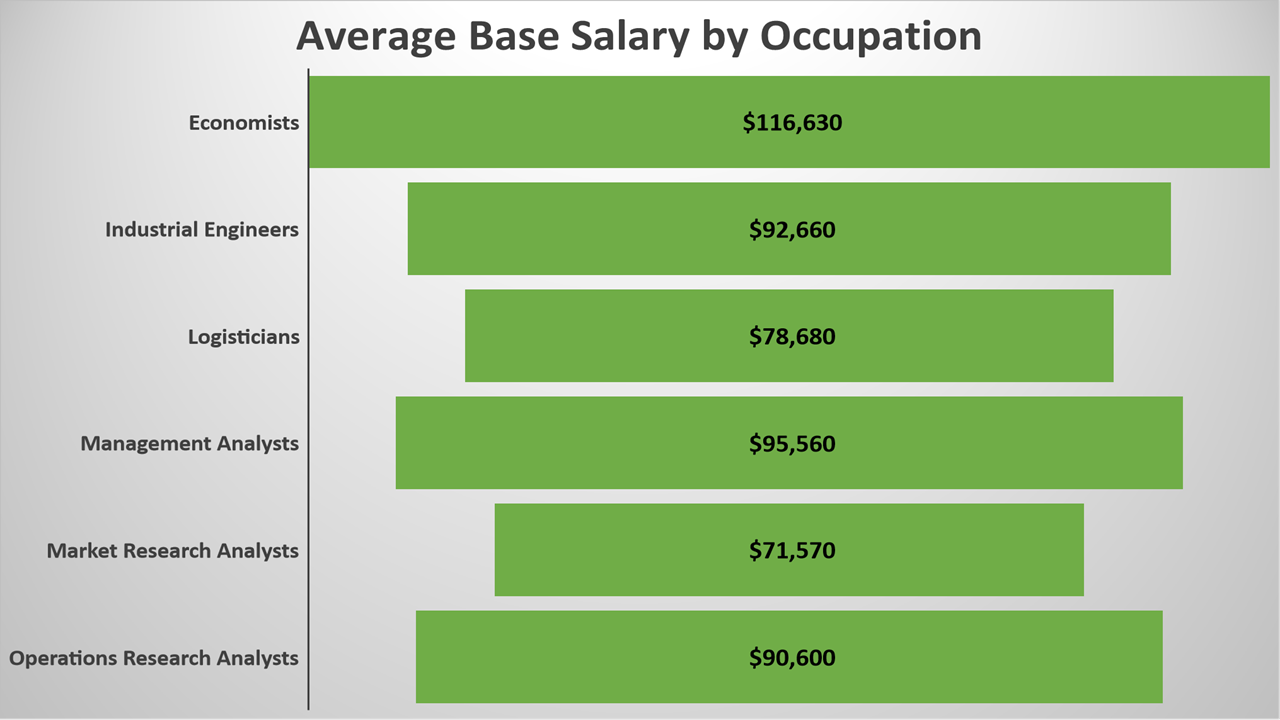 Average Base Salaries by Occupation 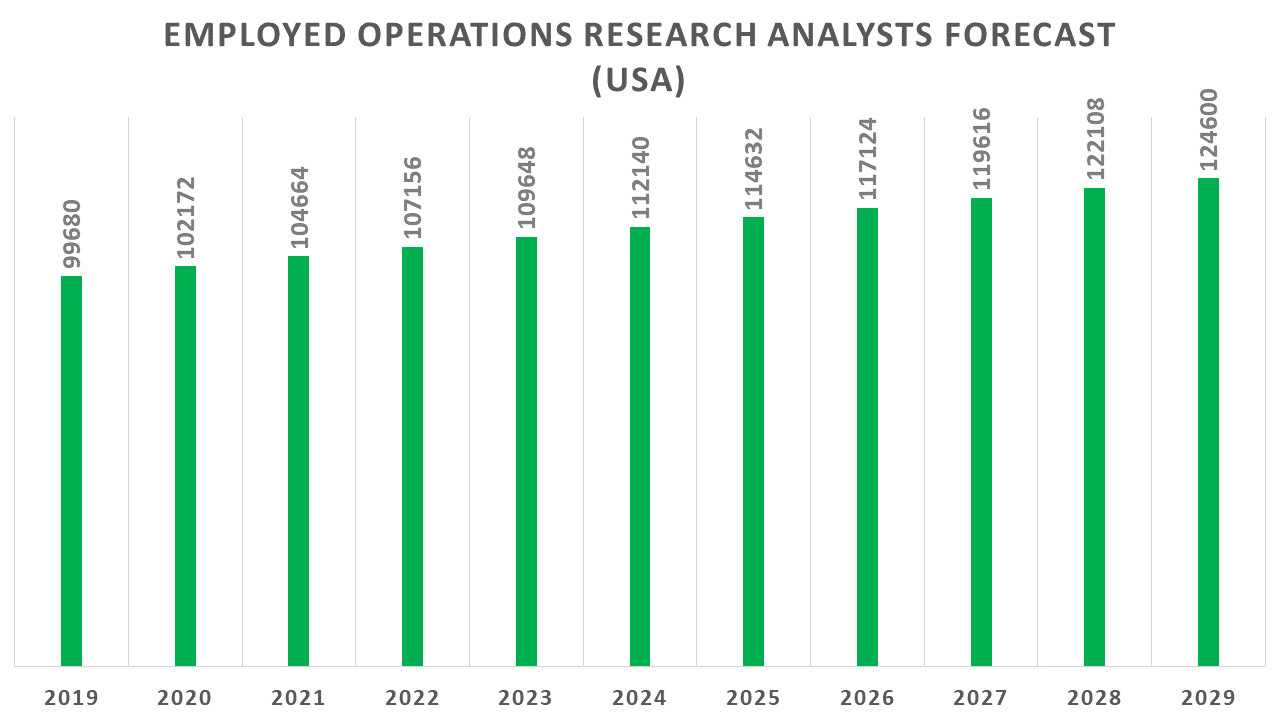 As we can see in the chart, operations research analysts are more and more in demand, and we expect that to be the case for the long future since decision-making and optimization are not a luxury for any field and for its uses in all the sectors including the super growing ones like Artificial Intelligence and Machine Learning. At the end of the decade, we predict to reach 124600 new employed operations research analysts. 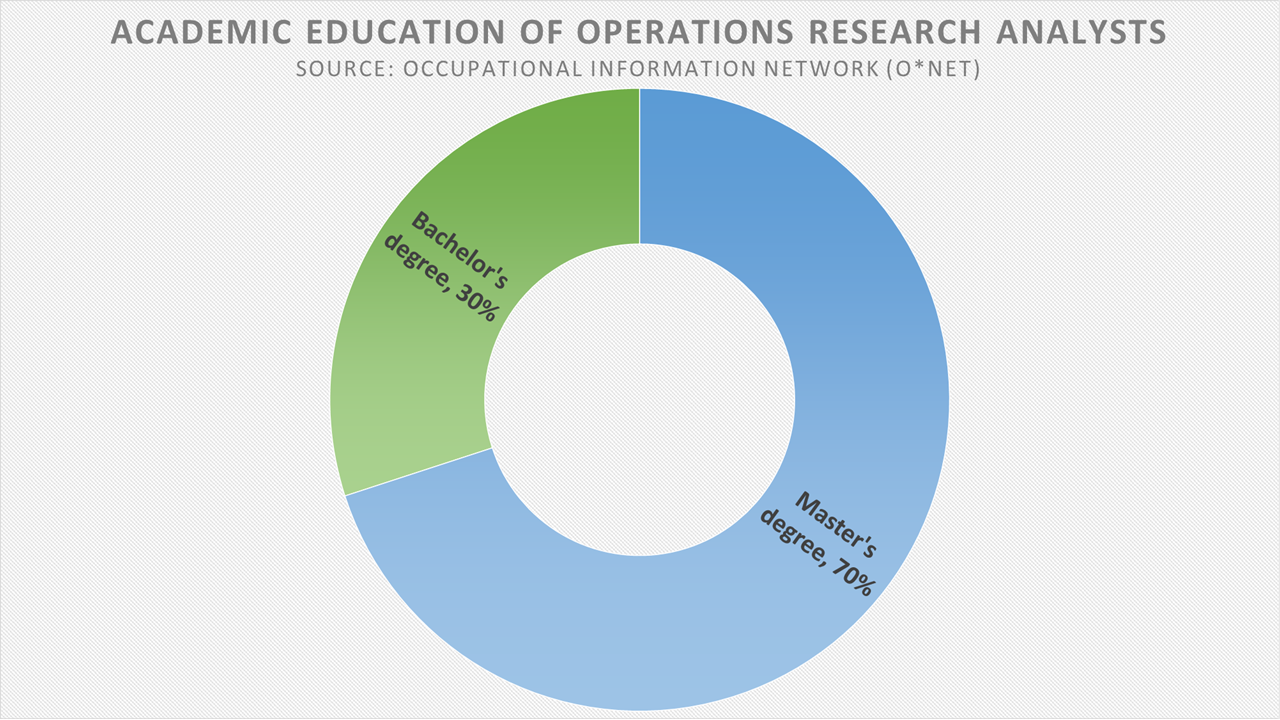 The chart shows that even operations research analysts that only have a bachelor’s degree have a decent portion with 30% of the total occupations, but we also see that operations research analysts with master’s degree have better chances and representing 70% of the total occupations, meaning that having a bachelor’s degree good and opens several opportunities and you can choose to widen your knowledge with a master degree and enter the job market with more chances at hand.

Are you interested in knowing more about operations research and its endless applications? Here are some links to some resources that you may want to check:

Operations research is an important discipline and science to incorporate into every business and so many fields, and since decision-making is necessary, crucial, and a key step of today’s world, then comes into view the operations research earning the title of the art of problem-solving and decision making, letting the world reap the benefits by integrating the science of doing better in every aspect possible.