How to Solve Equations of 1st, 2nd and 3rd Degree

We may face the task of solving different types of equations while studying mathematics, so in this post, we will see how to solve first, second, and third degree equations.

Possible cases for the solutions

First, we need to understand what are the possible solutions for solving equations, here they are:

as the set of the possible solutions for the equation.

1-No solution: some equations don’t have a solution, i.e. there is no value possible for the variable to make the equation verified or true. Here is an example:

We simplify the equation by multiplying through the parentheses we get

from both sides we get 6=10 which is false and therefore we deduce that there is no solution for this equation i.e.

2- Unique solution: equations may have a unique solution that verifies it, meaning that there is one and only one value for the variable to take to make the equation true. Here are some examples:

by subtracting 5 from both sides, we get

and by dividing by 3 both sides, we get

There it is the solution we are looking for

and it is unique.

is the only value for

to make the equation true,

from both sides to eliminate the

on the right side of the equation we get

and by adding 14 to both sides we get

, we get one and only one value for

to verify the equation, here is an example of that:

we can do the multiplication of the parentheses and get

Using the factored writing of the equation, for the right side to be equal to 0, one of the two parentheses must equal 0 and for that we have two cases:

by subtracting 5 we get

and by dividing by 2 we get

and by adding 3 for both sides we get

So we have two possible solutions for this equation

, let’s take a look at the following example:

by simplifying both sides, we get

from both sides we get

By simplifying the equation we got to

which is true all the time, it doesn’t depend on the value of

, so no matter the value of

the equation is always true, and since

has infinite possible values we have infinite solutions for this equation.

Now, after seeing the different cases of the number of possible solutions, let’s see how to solve equations of first degree, second degree, and third degree.

We call an equation of first degree every equation written like follows:

is the variable and

are real numbers with

Note that some equations of first degree are not on this form but after simplifying it always ends up with the form above.

We call it equation of first degree due to the variable

begin up to power 1, and it is the highest power of the variable

on the equation, meaning

and then all we need is pass b to the other side and divide by a, i.e.

and there it is the solution of the equation

We simplify the equation

then we get the form

and the solution is

is a line equation and the right side

is a line equation.

) means the point where the two lines intersect, so by drawing the line

We draw the line with the equation

We pick 2 values of

and get the respective value of

coordinate of the point of intersection of the line

and the x-axis is the solution of the equation. 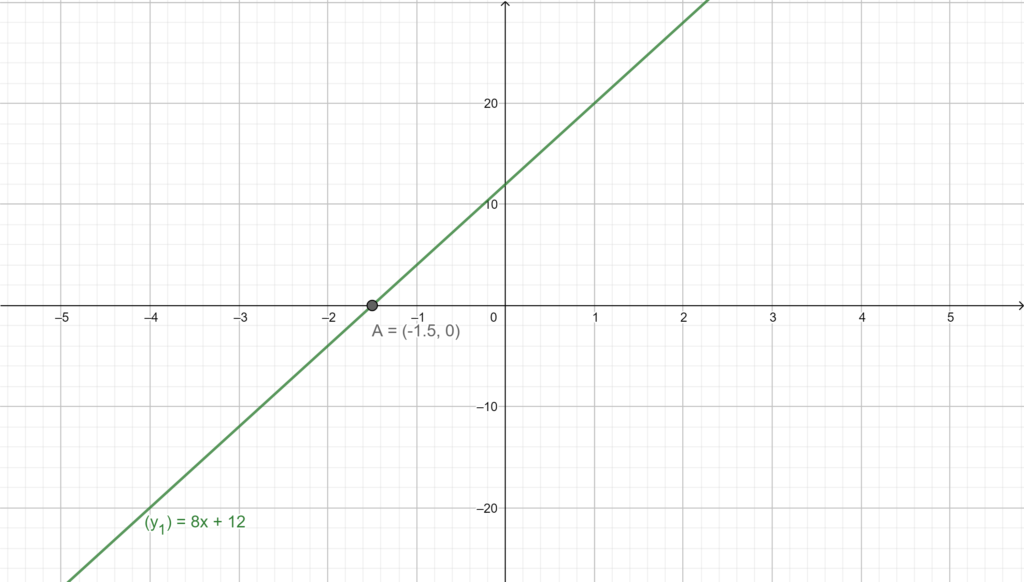 We call an equation of second degree, every equation with the standard form

being real numbers and

different than zero. It is called a second degree equation because the highest power of

Factoring to a multiplication of two first degree equations

How to factor a second degree equation?

So, to get from the right side form to the left side factored form we need to figure out the values of

knowing the value of

from the right side form. Let’s try an example:

We need to divide by 2 to remove the factor of

and to get the form

Now with this form, we know that

So, we need to find the two numbers

and 21 can be written as product as

must equal 10 we have

, so the values of

are the ones that make

After that, all we have to do is to write the equation in the form

, we solve each first degree term of the left side, we get:

We can verify by giving

We call the discriminant of the equation

, usually it is represented with the letter

Depending on the sign of discriminant we can determine the number and the value -if there is any- of the solutions, and the possible cases are the following:

1- If the discriminant is strictly positive (

Let’s determine the solutions for the equation:

We conclude that the equation has two distinct solutions, and they are the following:

2- If the discriminant is equal to zero, then the equation has one double root, meaning that the equation has two solutions that are the same so one repeated (or doubled) solution. The solution is given as follow:

Let’s determine the solutions for the equation:

We conclude that the equation has one solution, and the solution is:

If we take the previous example, we have:

3-If the discriminant is strictly negative (

), then the equation has no solutions.

, so we conclude that the equation has no solution (Because we can’t take the square root of delta since it’s negative).

In this method, we use the algebraic identity

is a real number.

To solve the equation

1- We divide both sides by

from each side, we get:

(i.e. the square of one half of

, so we can write the left side as follow:

5- We square root both sides and solve the equation in hand.

For a better explanation, let’s use this method with an example:

Second, we subtract 4 from both sides, we get:

Third, we add the

to both sides, we get:

We simplify the right side:

Forth, we write the left side as the algebraic identity, we get:

Fifth, we take the square root of both sides, we get:

from both sides, we get:

we can graph the function

and we look for which

By graphing the function

, the graph we get is a parabola, solving the equation

is equivalent to determine the value of

for the intersecting points of the graph with the x-axis. There are three cases: 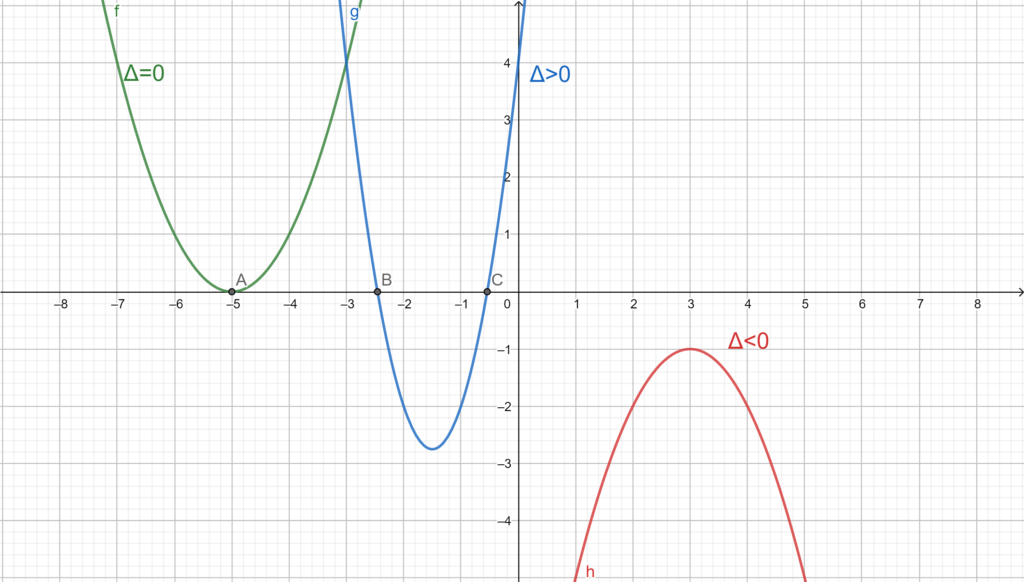 We call equation of third degree or cubic equation every equation when simplified has the following standard form:

are real numbers and

For the number of possible solutions, unlike first and second degree equations, a third degree equation has at least one solution. Algebraically the reason is that the term with the highest power of

overgrow the rest of the terms and tend to infinity in both sides depending on the sign, meaning that for very small negative values for

, and for very big positive values for

), that means going from one infinity to the other it passed by zero at least one time. There are three possible cases: one, two, or three solutions.

For a better understanding let’s try solving this equation:

by a second degree polynomial

, meaning that we can write the equation in the form:

Now we need to find the values of

, in order to do that we use the first expanded form of the third degree polynomial, i.e.

by expanding the left side, we get:

Since both sides now are in the standard form, to figure out the values of

Now we determine the values of

, by replacing a with 1 we find

Therefore, we have the values

using any one of the methods we saw previously, we get two solutions

, and the equation can be written in the factored form

Notice that in case the constant

in the standard third equation form is zero, meaning the equation is in the form

is a solution since each term has

therefore, we don’t need to go through all the process to determine the second degree coefficients, we just take

as a factor and we get our factored form as follow

already known and no need to determine them, so we proceed directly to solving the second degree equation.

since there is no constant, we take

is a solution, so we proceed to solve the second degree equation

using one of the methods shown before we get two solutions

We conclude that the equation

, and the factored form is

Geometrically, the reason why third degree equation has at least one solution is that the graph pass from

or the opposite (from

), and therefore we are sure that the graph intersects with the x-axis at least one time.

To solve a third degree equation, we can graph the function

and we look for which

Solving the equation is equivalent to determine the value of

for the intersection point of the graph and the x-axis. There are three possible cases: 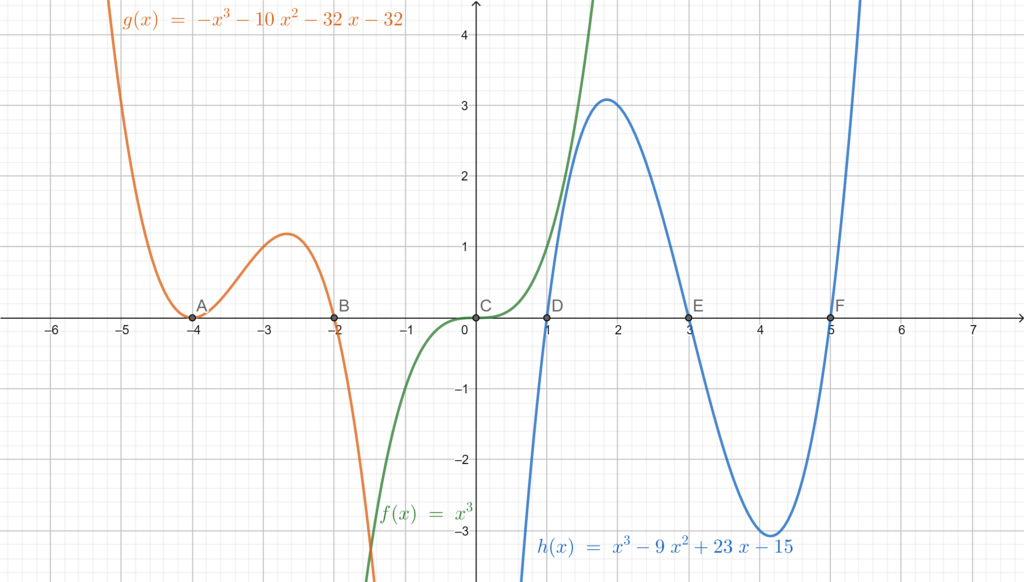 In conclusion knowing these solving methods can make the process of solving equations of first, second, and third degree equations straightforward, easier, and simpler with clear steps.

You want to have more fun! Check the graph below and see how the graphs change depending on the values of the coefficients. Check the type of equation you want to show (one or multiple), then slide to change the values of