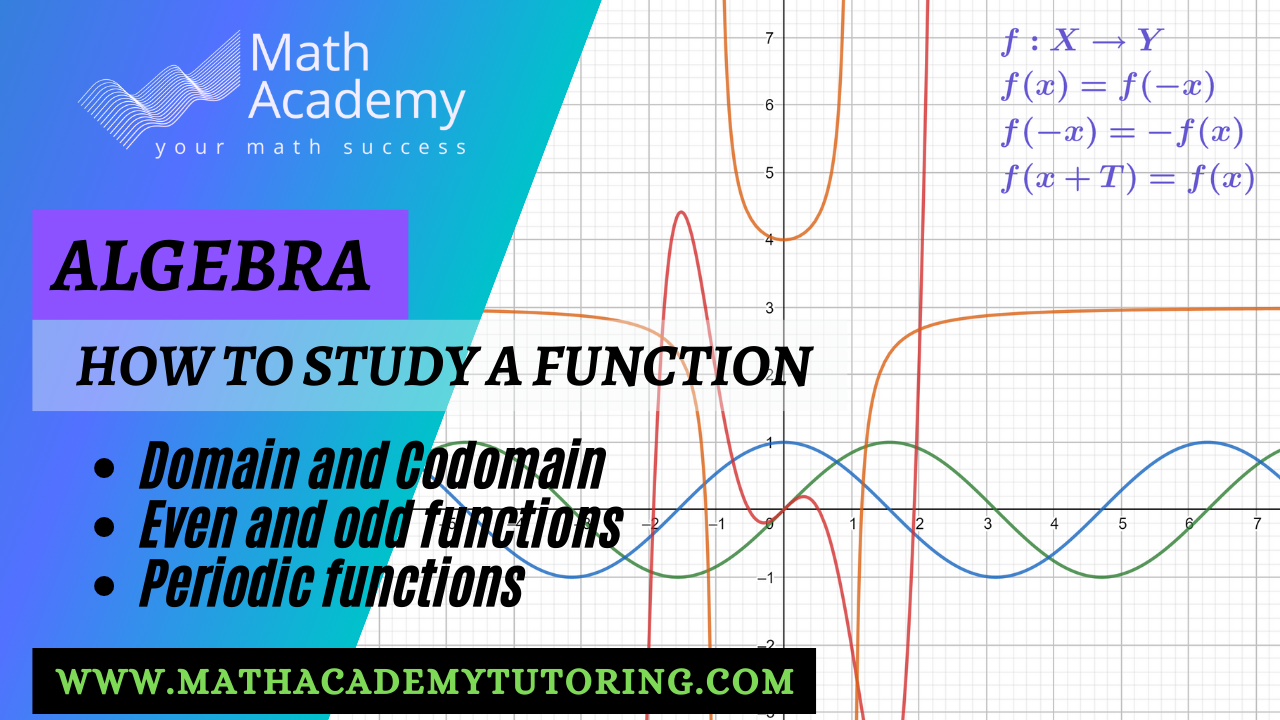 While studying mathematics you may have noticed that functions are widely used in nearly every subject. In a matter of fact, they are one of the most basic and fundamental objects in mathematics, so in this article, we will learn about functions, their definition, and their properties.

What is a function

We call a function a given relation between elements of two sets, in a way that each element of the first set is associated with one and only one element of the second set. For example, from the set of Natural Number

to the set Natural Numbers

, or from the set of Integers

to the set of Real Numbers

The first set is called the Domain, it is usually denoted by

and its elements by

, and the second set is called the codomain noted

. A function is usually denoted by a letter like:

If we take an example of a function called

is a relation between the elements

here is called the argument or the input of the function

, and we call the element

the value of the function or the image of

or the output of

For example, we note:

for a value of

is simply the procedure of replacing

-axis and one for the

is represented by all the pairs

on a plane generating the Graph of the function

The domain of definition

As we said before, the domain of definition is the set of the possible argument (or inputs) of the function, and every element of this set has exactly one image on the codomain. For better understanding let’s see some examples of functions and their domain of definition!

Example: determine the domain of the following functions:

, we can calculate the value of

for every real number

, because we cannot divide by

, so the domain is all the real numbers except

we can also note

Let’s take a look at the graph of F: 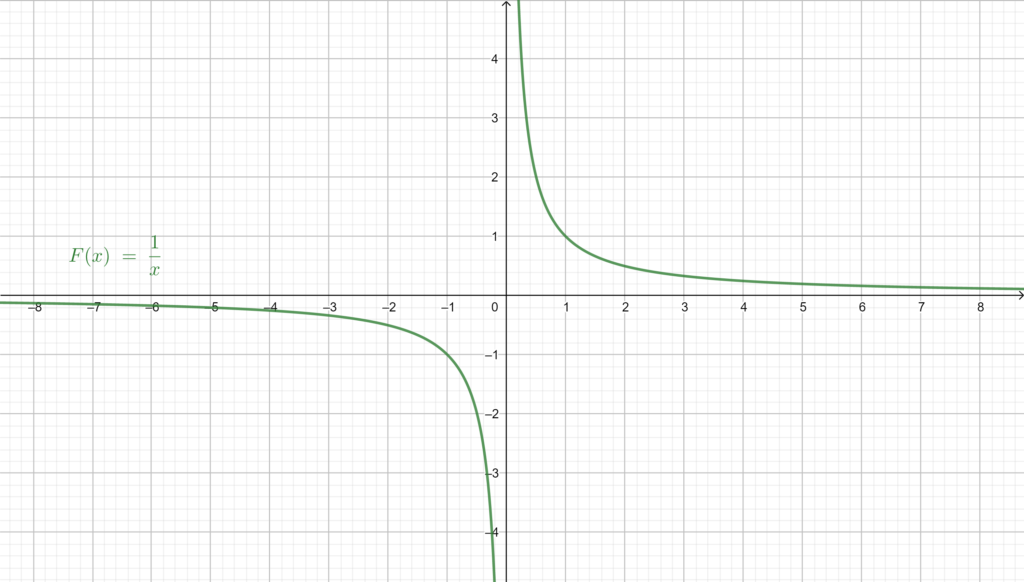 For the case of the second function, to determine the domain of definition of

we need to determine and exclude the values of

In other terms, we can evaluate the value of

So, for the denominator to be equal to

has to be equal to

doesn’t belong in the domain of definition

For the square root to be less than zero, we evaluate the expression

don’t belong in the domain of definition

So, by combining (the union) the two previous results, we get the excluded values are:

We conclude that the domain of definition of

, meaning the value of

Here is the graphical representation of 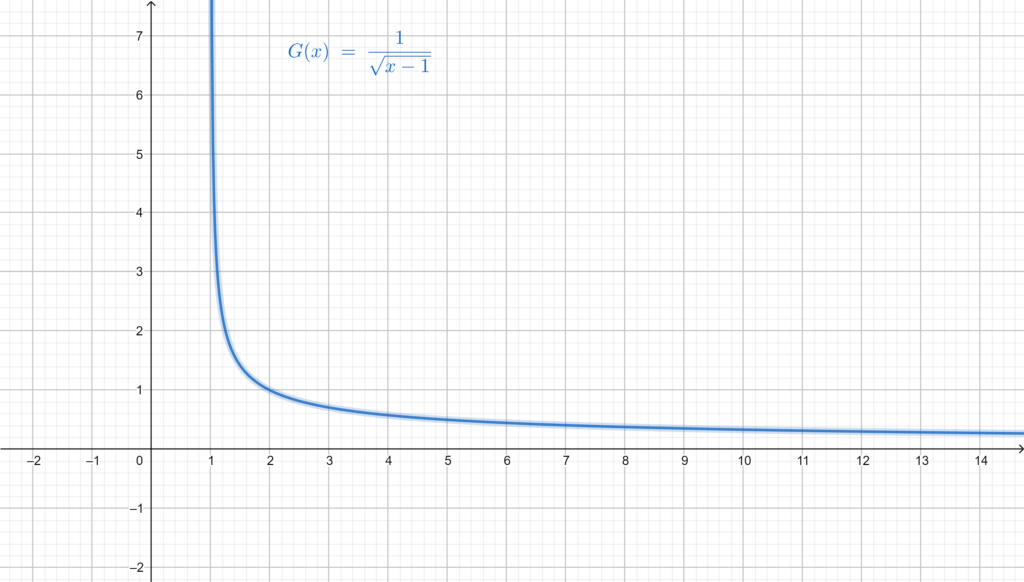 For the third function

, we notice that it is in the form of a fraction, so, we need to make sure that the denominator is not equal to zero and exclude the values of

is a remarkable identity (subtraction of two squares), meaning it may be written in the factorial form

. Now to determine the roots of the denominator all we need to do is to solve the equation:

and we have then:

, these two values of

are excluded from the domain of definition

Therefore, the Domain of definition of

Let’s see the graph of 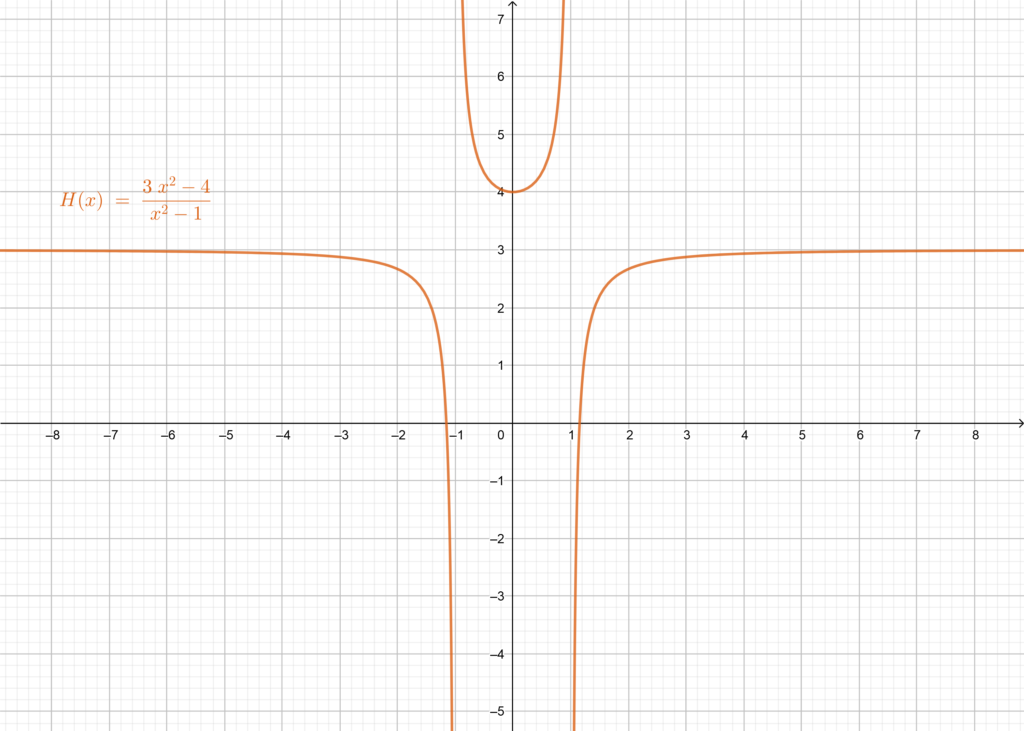 The domain of values (or codomain)

Definition: The codomain or the set of destination of a function

is the set containing all the output or image of

i.e. the set containing all

in the domain. In other terms, the codomain of a function

is the set of all possible outputs of

Note that the codomain can be bigger, smaller, or entirely different from the domain.

For example, A function can have its domain as Natural numbers

and the codomain as negative integers

; Or having the domain as the set of real numbers

and the same for the codomain.

Is the Square root a function? If we take

as the square root of a positive real number

is defined as follows

is not a function. This can be fixed by limiting the codomain to only positive real numbers!

which we use when calculating the root square of a number always means the positive square root, that’s why

is a function and always givesa positive real numbers as an output.

Here is a graphical representation: 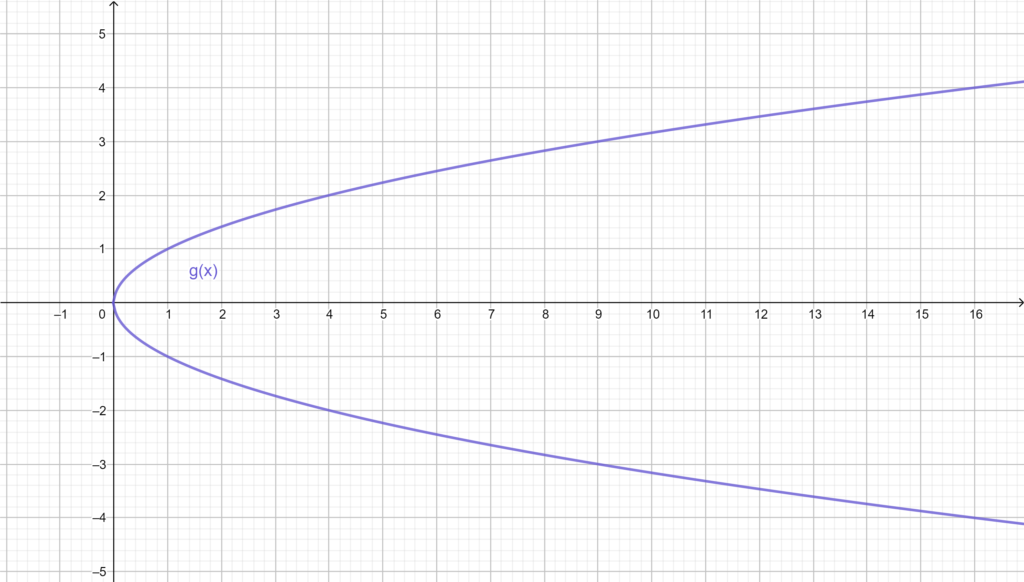 Note that the codomain may contain elements that are not images of any element of the domain, in other terms an element

in the domain that if we take

as input, we will get

as an output. For better understanding let’s take an example: If we take

We have here the domain of

is the set of real numbers

, and the codomain is the set of real numbers

. but the image of

(or the inputs) is not all

, it is a sub-set of the codomain

. In a matter of fact, The image of

and this is what we call the Range of

, Therefore the image of every element in the domain is contained in the codomain, but not necessarily the opposite.

and see its range.

Notice that the graph doesn’t go beyond

-axis which means the range of

and the range is a sub-set of the codomain

Even and odd functions

is called an even function, if and only if it verifies the following property:

Note that first, the function must have

as elements of its domain which means the domain must be symmetrical in the first place.

Graphicly speaking, the graph of an even function is symmetrical with respect to the

Let’s take a look at some examples of even functions with their respective graphs: 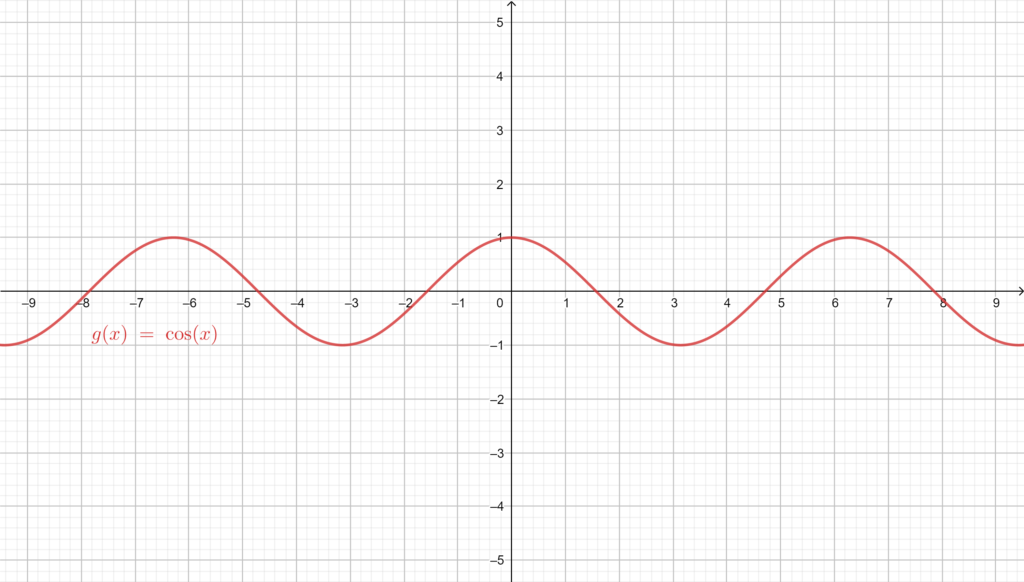 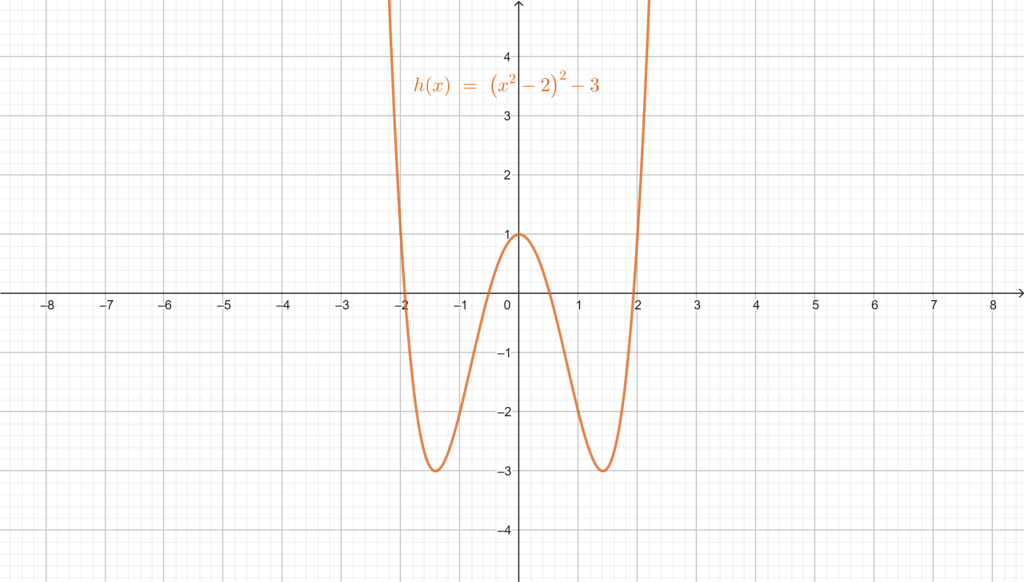 is an odd function if and only if it verifies the following:

Note that first, the function must have

as elements of its domain which means the domain must be symmetrical in the first place.

Graphically speaking, the graph of an odd function is symmetrical about the origin

Let’s take a look at some examples of odd functions and their respective graphs: 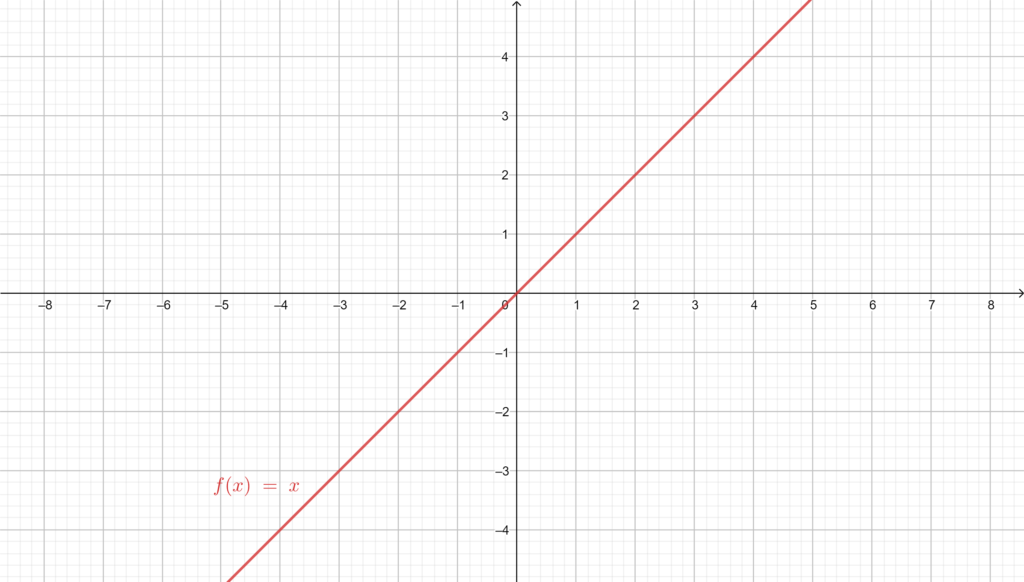 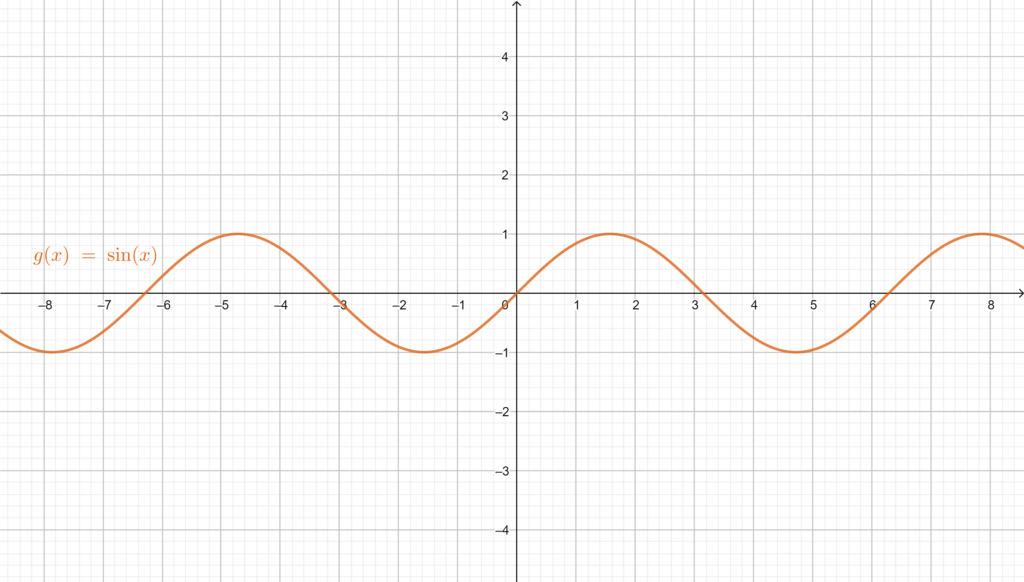 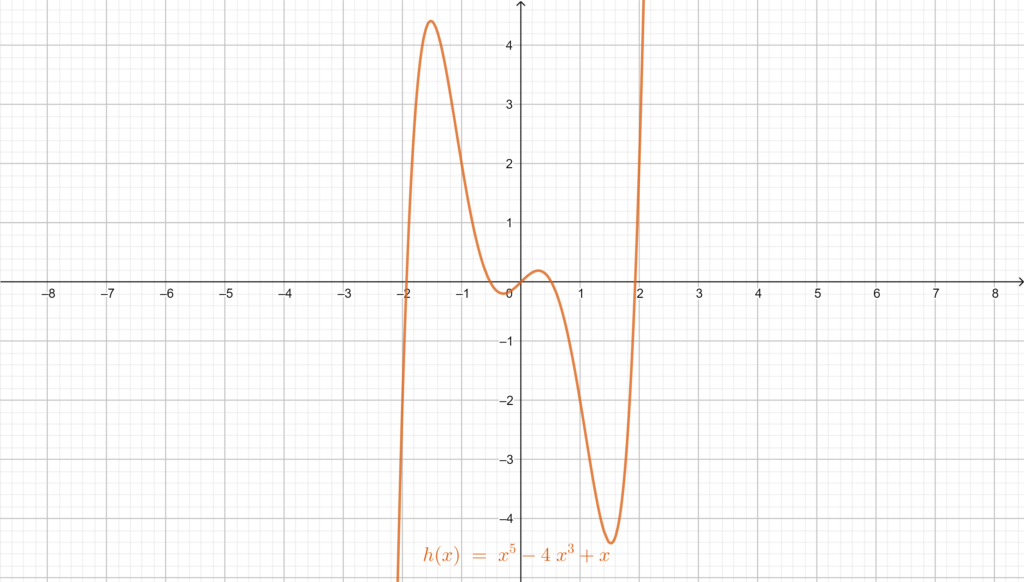 Some properties of Even and odd functions

You want to try out these properties! Check out the window below and see the results of the summation, subtraction, multiplication, or division of even and odd functions. Check the operation you want to display (one or multiple), and watch the respective graphs. Have fun!!!!!

We call a periodic function a function that its values (outputs) repeat regularly.

is called periodic with a period

, if and only if for any

of its domain, it verifies the following:

is called the period.

Graphicly speaking, a periodic function has a part of its graph repeats regularly.

Let’s take a look at some examples of periodic functions and their respective graphs. 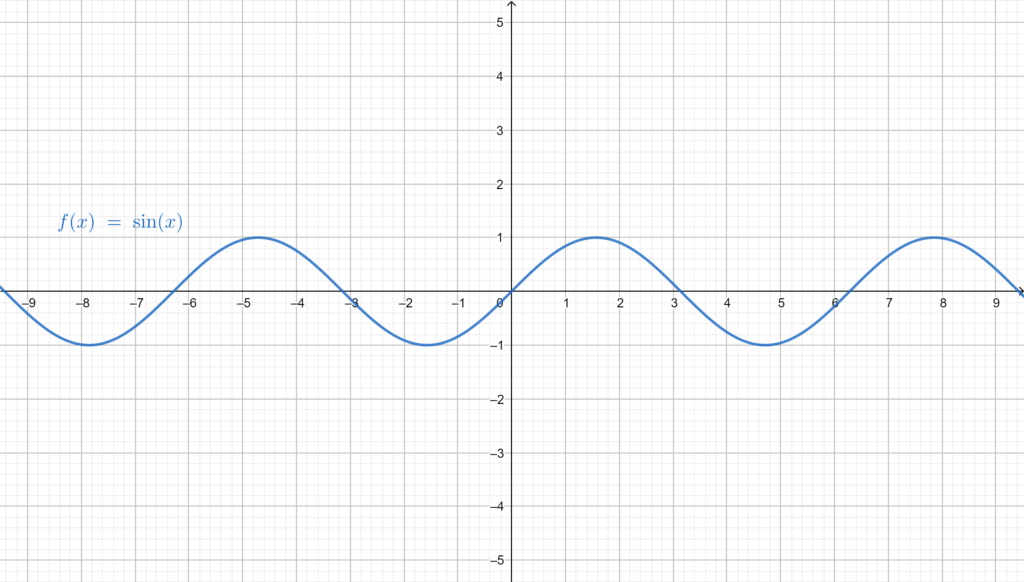 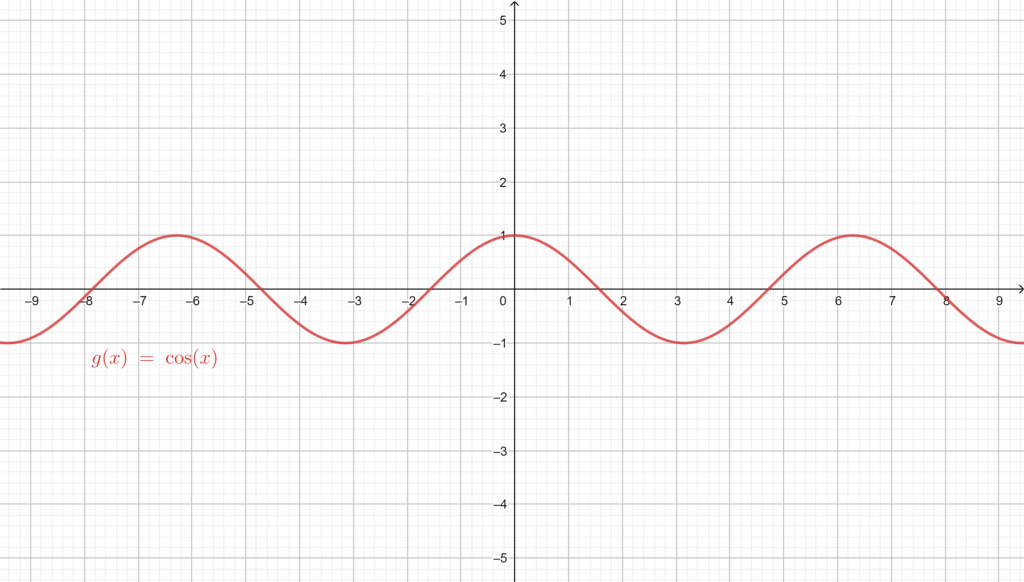 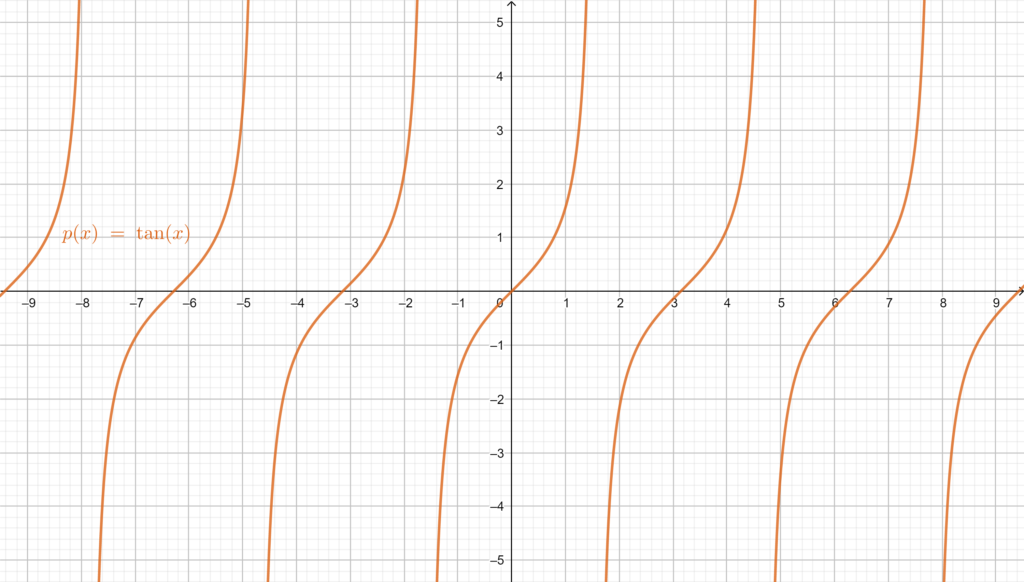 Some properties of periodicity

In this article we learned a little bit about functions and some of their properties and characteristics, this may be considered as an introduction to how to study a function and detect its properties which will help for better understanding of its behavior, but keep in mind this is just an introduction and there is a lot more to learn! isn’t that amazing! So who is eager for another post to learn more about functions!!!!!

Are you looking for another interesting article! Take a look at how to solve polynomial functions of first, second, and third degree. Enjoy!!!