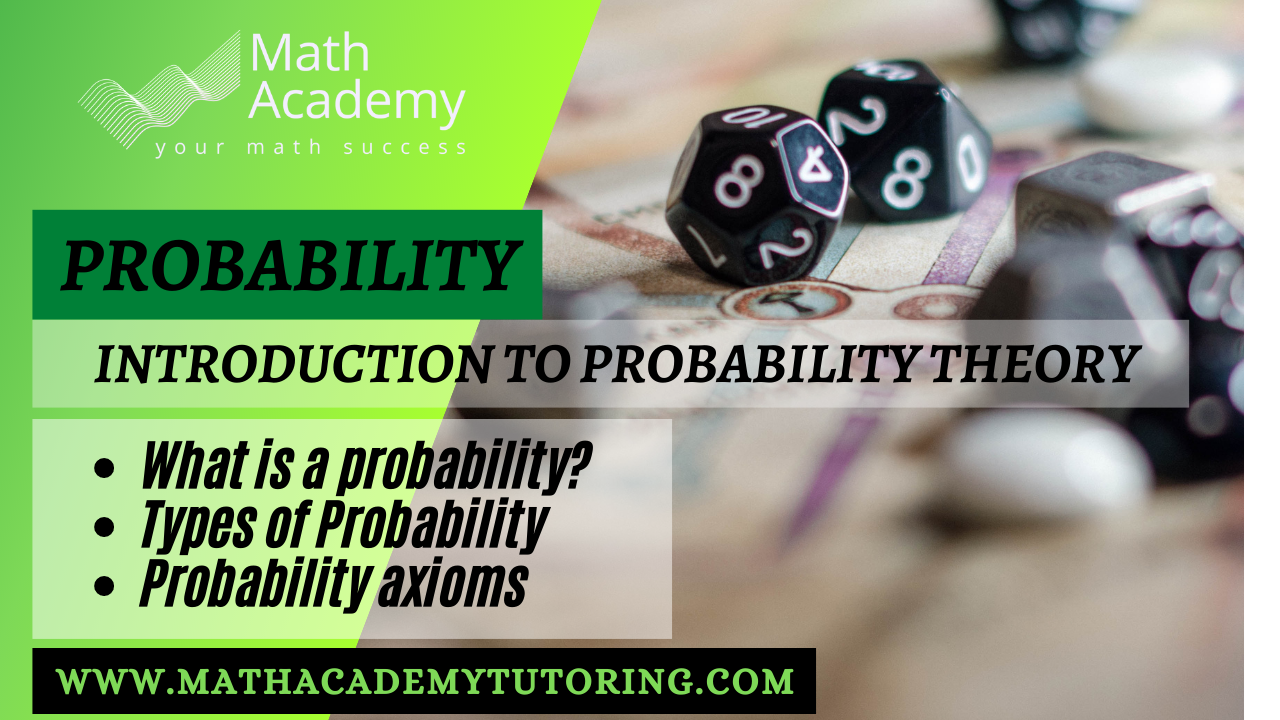 Probability, or what is also called probability theory is a branch of mathematics, it is concerned with analyzing and evaluating the chances, occurrence, or the results of random events or phenomena; it also studies the laws that rule these events, of course, it is not possible to determine with certainty the outcome of a random event, but probability theory aims at estimating the chances of happening of the different possible outcomes.

It may also be defined or described as a way to mathematically study events that occur randomly by chance and the rules and laws that they follow.

Historically, the origin of the probability theory goes back to the 17th century, and it started with the interest in the games of chance (gambling) and the study of insurance, since then and with the contribution of many mathematicians the foundations of probability theory was set, revealing its importance and utility in various aspects of life and many different natural and social sciences such as mathematics (with its numerous branches like statistics, game theory, …etc.), Physics, Astronomy & Cosmology, Finance, Banking & Stock market, Computer science, Artificial intelligence, Machine learning, Chance games (sports events, lotteries, horse races, …etc.), and weather forecasting to name a few.

What is a probability?

“A probability” means the chance of occurrence of a possible event. It has a value in the interval

i.e. if we note the probability by

; here we have two special cases: the first is when

is equal to 0, this means that there is no chance of occurrence of the event in consideration or in other terms “this event is impossible”; the second special case is when

is equal to 1, which means that we are certain of the happening of the event in hand, or we can say “this event is certain” which implies also that any other possible event is impossible. although the probability is a value from the interval

, it is often represented in a percentage form, for example, in the case where

is equal to 0, we say that the chance of the happening of the event in hand is 0% i.e., it is impossible; in the case where

) i.e., the occurrence of the event is certain, this explains why the probability is always in the interval

) and we can’t have a chance higher than “certainty” meaning we can’t be sure of the occurrence of an event more than 100% (i.e.,

). For a random probability

, all we need to do to convert the value of

“, if we take as an example

then we can write the probability as

. Therefore, we can conclude that if the value of

is too close to 0 then we can say that this event is unlikely to occur, if the value of

is close to 1 then we can say that the event is very likely to occur, and if the value of the probability

is in the middle of the interval i.e.,

then the event has even chances of occurring or not.

So how do we calculate the probability of occurrence of an event?!

After that, all we need to do is to follow the formula to determine a probability of an event given below

The probability of occurrence of an event

Where can we find probability theory

Well it is present either in an implicit manner or in a clear plain way in almost every field you can think about, here is a very short list that name a few:

Meteorology: This science is concerned with the study of the earth’s atmosphere and the prediction of the different weather conditions, utilize the gathered information on the weather conditions, and employ the already available data and patterns to determine the likelihood the different meteorological phenomena like precipitation, temperature, wind speed, and direction …etc.
For example, when we hear the weather network announce that the precipitation tomorrow is about 92% that means that we should carry umbrellas when we go out the next day.

Health care: Medical science uses extensively the probabilistic aspect in both research and treatment of the different medical cases. For example, if we take the research side, and if we look at the research in oncology for instance we clearly notice the importance of the probabilistic approach to determine the chances that a person gets cancer based on various studied factors that may increase or decrease the likelihood of getting cancer like age, antecedents and family history, lifestyle (smoking, drinking …) …etc. all these risk factors will be taken in consideration while calculating the chance of getting the sickness.

Another example which we all heard of it in the recent time, is the pharmaceutical industry which is responsible of the development and production of medication, and with the covid-19 pandemic, we saw an example of the probabilistic side of the industry specifically when each pharmaceutical producer of one of the vaccines announces the percentage of effectiveness, meaning the chance that the vaccine will work and that the person taking it will be protected from the virus.

Insurance sector: Knowing that the insurance sector is directly related to the happening of the different accidents and since accidents natural or human-made have are largely rules by randomness then the insurance companies base their insurance offers and rates on the likelihood of the customer having an accident (a car accident for example in the case of car insurance or a burned house in a forest wildfire in the case of home insurance …etc.). To do so, insurance companies use statistics and information about the different factors related to the insurance type that have any impact on increasing or decreasing the chance of accidents.

Sports: Sports are no exception to the use of the probabilistic approach, from teams to coaches and athletes to estimate chances of winning the game and to determine the best strategies to use in order to win the game or competition. To do so, players, coaches, and managers utilize the information from previous games and records for a better understanding of their strengths and weaknesses and to assure better performance in the next games.

There are many types of probabilities, we cite here the three main ones:

), and the probability of getting “Tail” is also

). so, the two events “Head” and “Tail” have the same probability of happening.

This kind of probability, as the name suggests, isn’t just theoretical but experimental, it is based on the observations and the results coming from an experiment. For example, if we make the experiment of tossing a coin 20 times, and we get “Head” 13 times and “Tail” 7 times, this means, according to the results of the experiment, that the probability of getting “Head” is

), and the probability of getting “Tail” is

The three axioms of Kolmogorov

This article was just an introduction to the branch of probability theory, presenting this field, defining what is probability, and introducing the different types of probabilities. Of course, there is no doubt we have a lot to learn about how to approach things from a probabilistic point of view, so don’t worry cause the probability of the coming of more fun articles is 1!!!