Sure and impossible events:

An example of a sure event is the event that the sum of rolling of two dice is less or equal to 12.

An example of an impossible event is the event of getting a number greater than 6 on a roll of a die.

We call a “simple event” all event that is a one and only one element of the elements of the sample space.

For example, the event of getting the number 5 from a roll of a fair die is a simple event since 5 is one element of the sample space

, but if we take the event

of getting a prime number as a result of a roll of a die, this event is not a simple event since the event E is composed of multiple elements of the sample space

meaning that it has three elements of the sample space and not just one.

For example, the event of getting an odd number after the rolling of two fair dice is a compound event since it contains six elements of the sample space, so if write the sample space we get

and we have the set of the event

can be written as

, we can clearly see that the event

is a compound one.

But, if we take the event of getting a “Tail” after a fair coin toss, this event is not a compound one since it has only one element of the sample space

(and therefore it is a simple event).

For example, if we take the case of rolling a fair die, we know that every roll is completely unaffected by the result of the previous roll, so the chances of occurrence of the number 2 for instance, is the same no matter the number we got from the last roll.

Another example is the toss of a fair coin, it is clear that every toss is completely separate from the next one, and we know that every toss is not affected whatsoever by the result of the previous toss, so if we take for instance the chances of getting “Tail” after getting fifty-three times in a row the result “Head”, the chances are still the same, and we still have

Another one is getting a free lunch at your favorite restaurant and the weather becoming rainy; winning the lottery and the occurrence of a solar eclipse that day; or raining and running out of milk.

We describe events as “dependent” in the case where the probability of occurrence of any event is affected by the happening of another event and we call them “dependent events”. In other terms, for two events to be called dependent one must have an influence on the chances of occurrence of the other.

So, one good example of dependent events is the following: if we consider having an urn containing 4 white balls, three blue ones, and 7 purple ones, if we take out a ball without looking and without returning it back to the urn, and we consider and we consider the event A of taking out a purple ball, well, at the first take out we have the probability of this event as usual which is the number of favorable outcomes divides by the total number of the possible outcomes, so we get:

But if we consider a second take out, knowing that we took a purple ball in the first time, the probability is affected, it is no more

because when we took out one ball, we didn’t put it back in the urn and therefore we have now 6 purple instead of 7 and we have a total of 13 balls instead of 14.

For example, if we have the experiment of rolling of a fair die and if we consider the two events

: the event of getting an odd number.

: the event of getting an even number.

Also, we write sample space and the two events

in the form of sets, we have:

Then we know that the two events

is the empty set).

Another example is the toss of a coin, we have one of two events: “Head” or “Tail” and the occurrence of one of them implies the non-occurrence of the other since we can’t have the two results together.

Some other examples are: winning and losing the lottery, driving forward and backward, …etc.

Suppose we have a sample space

, we call the “complementary event” of

Notice that the two events

For example, if we consider the event

of having a number less or equal than 4 as a result of a rolling of a fair die. We have the sample space

, and we have the event E1 can be written as

, thus we have the complementary event of

After taking a look at the different types of events let us now learn what is conditional probability.

Thus, the goal of conditional probability is finding the probability of an event given that or knowing that another event has occurred.

If we have two events

the probability of occurrence of

, provided the information that

has already happened is noted by the notation:

and we read: the probability of the event

Let’s take a quick example: If we have an urn containing four balls: white, blue, orange, and purple, in this experiment we draw without returning the drawn ball.

And we want to evaluate the probability of drawing the orange ball after already drawing the purple one.

First, we note the following events:

: The event of taking out the purple ball.

: The event of taking out the orange ball.

Now, and assuming that the balls have the same chance of getting taken out, we have that the probability of drawing the purple ball is

But assuming that the event of picking the purple ball occurs, now we have three remaining balls which imply a change of the probability of picking one of them it is no more

, instead it is now

For more understanding let’s take a look at this example: Suppose that a fair die has been rolled and we want to evaluate the probability of getting a 2. Typically and since the die is fair the probability is

. But if we are given the information that the resulting number from the roll is an even number! Now we do not still consider the sample space as if it still has all six possible outcomes, but instead, we now have only three possibilities which are 2,4, and 6, and thus the probability becomes equal to

Now suppose we got different information, we got informed that the resulting number of the roll is an odd number! In this case, we know that the chances of getting a 2 are impossible meaning

This demonstrates how the new information can influence the probability and help to get a better and more accurate estimation of the occurrence of the event in question.

The formula of conditional probability

The conditional probability has a formula that helps us to evaluate the wanted probability easily, let’s take a look at it:

Suppose that we have two events

: the probability of the event

: the probability of the intersection of

And therefore, by dividing the formula by

we derive the formula for the conditional probability

Here is a tree diagram illustrating the multiplication rule: 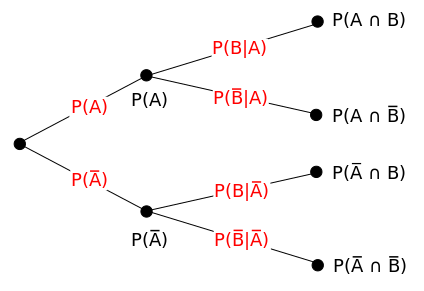 So, an easy visual way to calculate conditional probability is by using the tree diagrams.

From the definition we saw of independent events, we know that one event doesn’t have any effect on the probability of occurrence of the other, and therefore the conditional probability of the events A and B and knowing that the two events are independent is given as follow:

Let’s suppose that we have a sample space

and that it is divided into three disjoint events noted

; therefore we have the following result for any given event

And by replacing the terms on the right using the multiplication rule we get the expression for the law of total probability:

Properties of the conditional probability:

Here are a few properties of conditional probabilities:

Suppose we have three events

, we have the following properties:

The British mathematician Thomas Bayes from the 18th century developed a mathematical formula that helps us to determine the conditional probability (also known as Bayes’ law or Bayes’ rule), this formula is given as follow:

Suppose we have two events

This theorem is fundamental, important, and of great use in order to estimate the probability of an event based on new knowledge and information that may have a relation with the event in question. This helps us update the probabilities and estimations and get more accurate and updated predictions and revise the present ones knowing the new information.

Conditional probability is one of the most important and fundamental concepts of the probability theory, and in many other fields and sciences since it deals with the idea of the existence of a relationship between the events that may cause a change or make a difference in the estimation of the probability of the events in question, and this idea of the existence of a relation between things is what is most common in sciences and in the real-life in general. Also, the Bayes’ theorem is widely used in various fields like statistics and finance, banking, sports, health care, and genetics to name just a few. And with the growing businesses dealing with huge data and information the importance of probability theory and its various branches is more and more clear and apparent.

Well, here we come to the end of this article, and after taking this fun journey with conditional probability and the different properties, and learning about the importance and usage of conditional probability in real life, it is safe to say that we are extremely excited to learn more about probability theory and wander through the world of probabilities!!! Don’t worry at all, more fun articles are coming soon!!!

There are also some articles about Set Theory like Set Theory: Introduction, or Set theory: Venn diagrams and Cardinality!!!!!